BANGKOK, Sept. 2 (Yonhap) -- The leaders of South Korea and Thailand will hold summit talks in Bangkok on Monday primarily on working together in response to the fourth industrial revolution.

He will first attend a welcoming ceremony, hosted by Prime Minister Prayut Chan-o-cha, to take place at the Government House of Thailand, also known as Thai Ku Fa.

They are scheduled to have a summit with a focus on ways to expand and strengthen bilateral partnerships.

South Korea especially hopes to create synergy between its innovative growth drive and the "Thailand 4.0" project. 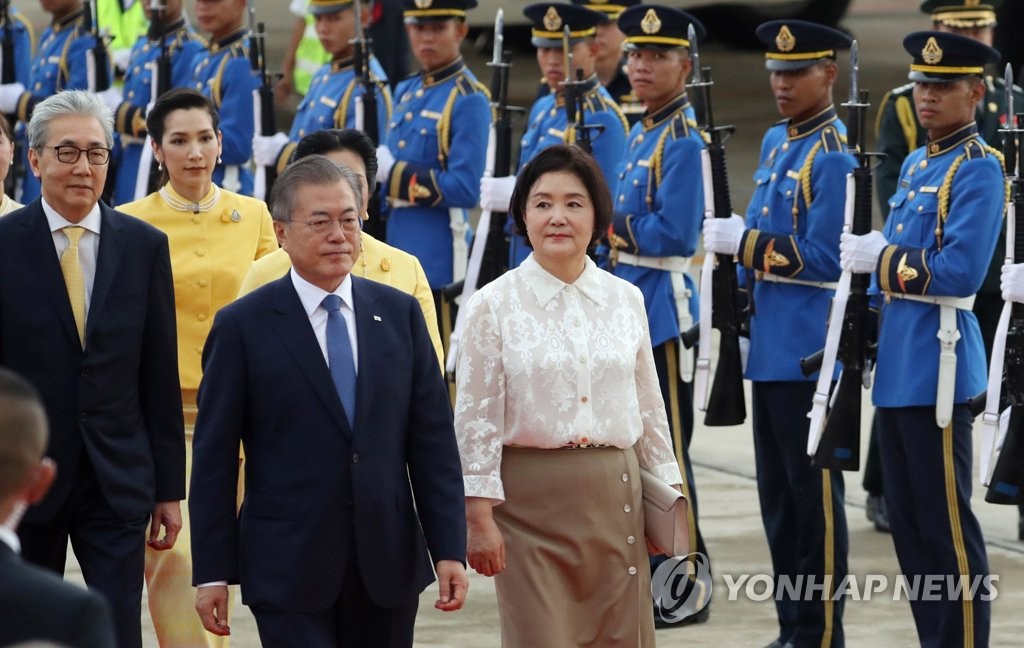 "I regard relations with Thailand as very important, and I want to see our cooperative relationship make further strides," Moon said in a written interview with the Bangkok Post before his trip here. "Our bilateral cooperation will continue to expand. I also look forward to our two countries working together in responding to the era of the fourth industrial revolution."

He cited next-generation vehicles, robots, bioscience and smart electronics as industries on which the two countries need to collaborate.

Moon is also expected to request the Thai government's support for the special summit between South Korea and ASEAN to be held in Busan on Nov. 25-26 and a separate summit the next day between Moon and his counterparts from five ASEAN countries located around the Mekong River -- Cambodia, Myanmar, Laos, Thailand and Vietnam. Thailand holds this year's rotating presidency of ASEAN.

Joo Hyung-chul, a Cheong Wa Dae adviser for economic affairs, pointed out that South Korea has great potential for cooperation with Thailand, which has the second-biggest economy in Southeast Asia.

Moon, meanwhile, plans to meet with a group of Thai Korean War veterans as well. Thailand dispatched 6,326 troops to help South Korea fight against North Korea during the 1950-53 conflict.

He will then join a special event, called the "Fourth Industrial Revolution Showcase," and deliver a keynote speech at a related business forum before holding a meeting with ethnic South Koreans in Thailand.