(ATTN: UPDATES with more info throughout; TRIMS throughout)

SEOUL, Sept. 2 (Yonhap) -- Cho Kuk, the embattled justice minister nominee, denied allegations relating to his daughter's education and a dubious investment in a private equity fund (PEF) Monday, as he sought to clarify the corruption scandals involving his family.

Cho, former senior presidential secretary for civil affairs, held a press conference at the National Assembly after his confirmation hearing set for Monday and Tuesday fell through amid political wrangling.

Cho has faced a public outcry over alleged irregularities involving his family, including the suspected unfair entrance of his 28-year-old daughter into an elite university and a hefty investment by members of his family in the PEF.

His daughter was listed as the primary writer of a pathology paper as a high school student in 2008 after she took part in a two-week internship program at a medical science institute of Dankook University.

Critics speculate that he may have been involved in her listing as the main author and that the paper might have helped her gain admission to Korea University in 2010.

"I did not know about the detailed process (of the listing) at that time, and I've come to identify the allegation during the latest verification process," Cho said.

Cho dismissed allegations that he had contacted a Dankook University professor to enable his daughter to receive preferential treatment.

"It seems that standards in judging who is the primary or secondary writer were murky, or granting that status hinged on a professor in charge at that time," he added.

Since his nomination in a Cabinet shakeup last month, such allegations have constantly made headlines, raising doubts about his qualification to be justice minister.

Cho, a reform-minded law professor, said he "deeply" apologizes for the fact that the allegations caused public uproar.

Public anger at his "hypocritical" behavior has increased as Cho has preached for a fair and just society and has highlighted the need to eradicate social ills committed by the privileged.

"I am deeply sorry and apologize (to the public) over the fact that I was not strict with the people around me," he said. 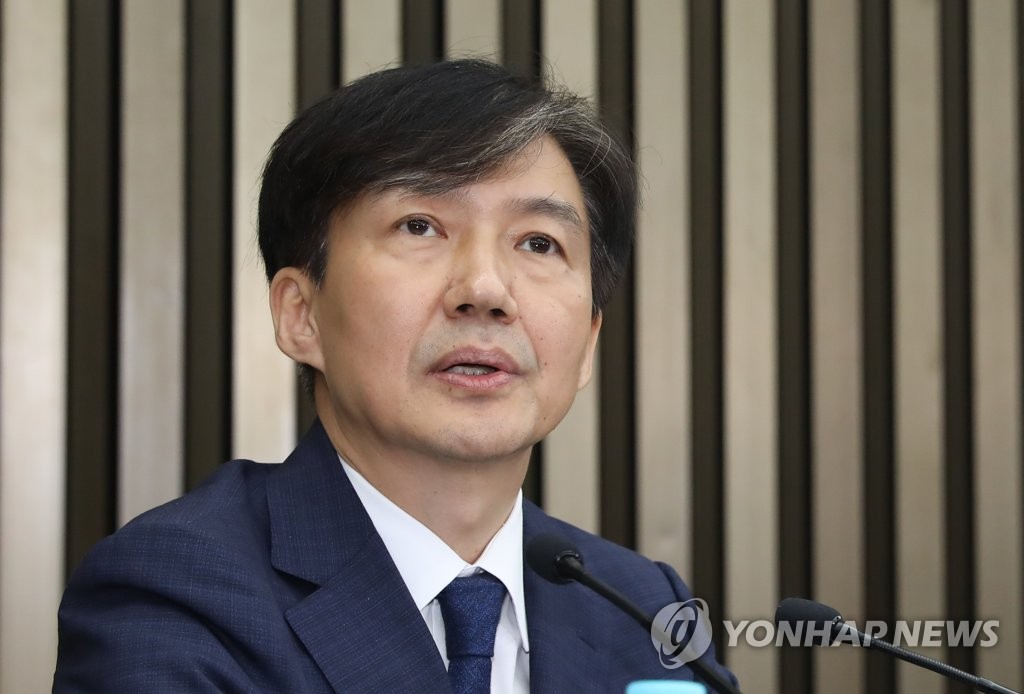 Last week, prosecutors carried out simultaneous raids on 20 locations, including five universities and an office in charge of running the fund cited in the allegations as part of its probe into them.

During the press conference, Cho said if he is appointed as the minister, he will order the prosecution not to report to him the progress of the investigation into his family.

"Prosecutor-General Yoon Seok-youl will conduct probes in accordance with the law and based on evidence," he added.

The nominee, meanwhile, flatly denied allegations over the PEF investment by his family.

His wife is alleged to have sought to evade gift tax after she invested over 1 billion won (US$865,765) in the PEF with her two children.

Cho's family promised to invest the money, which is larger than its total wealth, in the fund two months after he was named presidential secretary for civil affairs in May 2017.

The fund bought a stake in a firm that produces automatic switches for streetlamps -- the company later secured hundreds of orders issued by the government and saw an increase in sales.

"My wife and I did not know the details of the PEF and its operation, so (my family) was not involved in the fund's operation," he noted.

Opposition parties strongly condemned Cho's press conference. They insist that the allegations should be explained at a confirmation hearing.

The main opposition Liberty Korea Party (LKP) criticized it as a "concert designed to deceive people."

The minor opposition Bareunmirae Party branded it as illegal and unveiled a plan to file a complaint with the prosecution against President Moon Jae-in and related officials for abuse of power.

President Moon's nomination of Cho is said to reflect his commitment to conduct the sweeping overhaul of the prosecution.

Cho was the main architect of Moon's vision for the prosecution reform to guarantee its political neutrality and grant more investigation power and authority to police.

He promoted himself as one of the most appropriate persons to complete the reform.

"Now is the right time to reform the prosecution. As a person long involved in the reform drive, I would like to complete it," Cho said.

The adoption of a confirmation hearing report by parliament is a procedural means to express the assembly's consent to the president's nomination of minister-level officials.

Moon is expected to again ask the National Assembly to send back a hearing report to him on Tuesday, one day after the legal deadline by which parliament should do so. The move means the president will press ahead with the appointment of Cho regardless of a hearing.

A Realmeter poll showed a majority of respondents are opposed Moon's appointment of Cho as justice minister. But the portion of people approving of his appointment rose to 42.3 percent on Friday, up 3.1 percentage points from two days earlier. 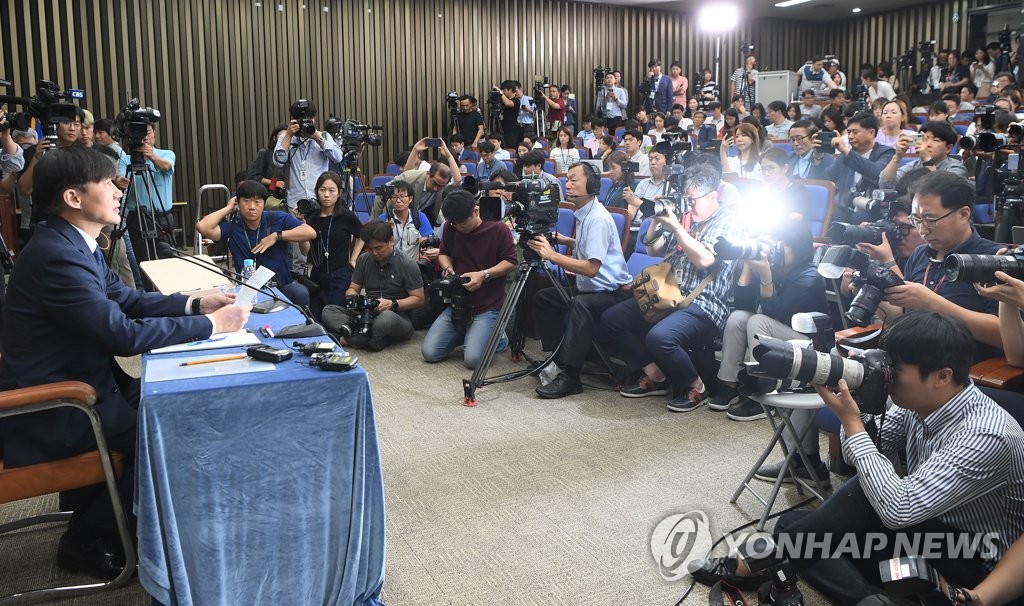