Their lackluster sales were mainly attributable to lower demand in China and emerging markets and uncertainties surrounding a yearlong trade battle between the United States and China -- the world's two biggest automobile markets. 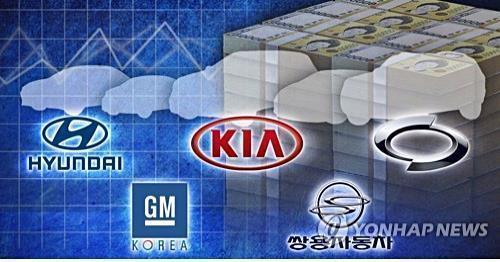 Hyundai, the maker of the Sonata sedan and the Sonata SUV, expects its Palisade SUV, which is now available in U.S. dealerships, to help boost sales in the second half.

Kia, which is 34-percent owned by Hyundai, also expects the Telluride SUV will give a boost to its annual sales, particularly in the U.S. market.

The two, which aim to achieve their sales target of 7.55 million vehicles for this year, sold a combined 4.66 million units from January to August, down 3.4 percent from 4.82 million units in the year-ago period, the data showed.

As sales in China are expected to remain weak for the rest of the year, Hyundai and Kia plan to continue to launch more localized models in efforts to recapture local demand in the world's biggest automobile market.

From January to August, the five firms' overall sales were down 4.2 percent to 5.15 million from 5.37 million in the same period of last year, the data showed.