The country's gross domestic product (GDP) expanded 1 percent in the April-June period, rebounding from a 0.4 percent on-quarter contraction the previous quarter, according to preliminary data by the Bank of Korea (BOK).

The latest reading marks a slight decrease from an earlier estimate of a 1.1 percent on-quarter expansion estimated in July.

The BOK explained that exports, which account for nearly half of South Korea's economy, went down 0.3 percentage point. Government spending rose 0.3 percent point lower than the July estimate.

From a year earlier, the Korean economy grew 2 percent in the second quarter. 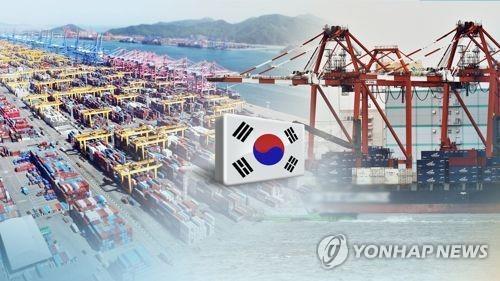 Exports dropped 13.6 percent in August from a year earlier, extending their on-year decline to a ninth consecutive month, amid the lengthy trade war between the United States and China. A brewing trade dispute with Japan is also likely to weigh on the Korean economy.

Outbound shipments came to US$44.2 billion last month, compared with the $51 billion tallied a year earlier, according to the government data. Imports fell 4.2 percent on-year last month to $42.4 billion, the ministry added.

Last week, the BOK left its policy rate unchanged at 1.5 percent but hinted at slashing the rate later this year, as two BOK board members cast dissenting votes in the rate-freeze decision.

The decision came after a quarter percentage-point reduction for the first time in three years in July.

The BOK is expected to cut the rate after the effect of the July rate cut is fully passed through the economy, analysts said.

"Global conditions are slowing and the external pressures on South Korea have increased," Moody's Analytics said in its weekly report.

"The protracted trade dispute between the U.S. and China shows little sign of abating and may intensify, even as President Donald Trump's comments oscillate in signaling intent for a trade deal."

Meanwhile, the BOK said the country's real gross national income rose 0.2 percent in the second quarter from a quarter earlier. Compared with a year ago, the income grew 0.3 percent.
(END)