SEOUL, Sept. 3 (Yonhap) -- The government on Tuesday announced a plan to create about 55,000 new jobs in the environment and design industries by 2022.

The massive job creation plan was finalized by the Presidential Committee on Job Creation during its 12th conference held at the Korea Press Center in Seoul.

In the environmental sector, the government aims to create 50,000 new jobs, mostly in accordance with its ongoing efforts to fight fine dust pollution and improve waste disposal, the committee said. 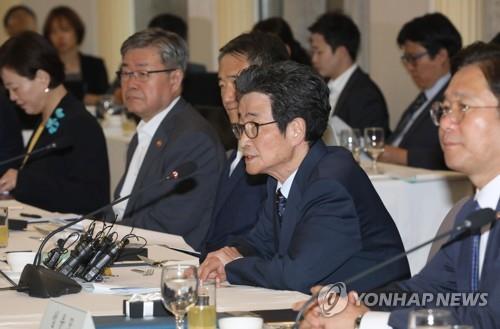 In addition, the government will extend support to recycling companies for the sake of safe waste disposal and expand social infrastructure related to waste incineration and burial, the committee said.

Other environmental jobs will be created through the fostering of water industry clusters, expansion of urban ecological restoration and drone-based surveillance for pollution sources.

In the design sector, the government will increase support for enterprises that innovate designs of consumer goods and help promote the growth of prototype manufacturers.

In particular, the government will expand support for design projects as part of its efforts to cope with the aging society and other social problems, while fostering more young designers through various youth job creation projects by local governments.

Through such efforts, about 5,400 new jobs will be created in the design sector by 2022, the committee said.