SEOUL, Sept. 3 (Yonhap) -- The government plans to increase its job creation budget by over 20 percent to a record volume of nearly 26 trillion won (US$21.4 billion) next year, with unemployment benefits accounting for a record 40 percent of the total, the Ministry of Employment and Labor said Tuesday.

The government will spend 25.77 trillion won in 2020 on job creation, marking a rise of 21.3 percent from this year, the ministry said, citing a government budget proposal for next year that was endorsed by the Cabinet last Thursday.

By category, the government will earmark 10.36 trillion won, or 40.2 percent of the entire job creation budget, for the financial support of the jobless, which includes unemployment benefits and employment promotion allowances. 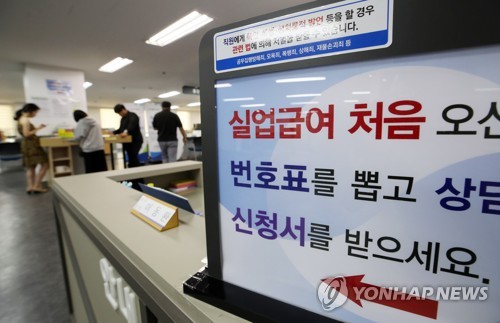 Budgets for business creation and vocational training will increase to 2.36 trillion won and 2.29 trillion won, respectively.