SEOUL, Sept. 3 (Yonhap) -- Hate speech is a growing issue in South Korea where politicians lash out with insensitive comments toward women and the LGBT community, and online commenters harass social minorities with hurtful words.

The Korean suffix "choong," which technically means insect but more often is associated with a derogatory connotation, is widely used to discriminate the socially vulnerable, such as mothers, the elderly and LGBT population.

A recent report by the National Human Rights Commission of Korea found that 64 percent of the 1,200 adults surveyed have experienced hate speech. Roughly 87 percent of them thought this was "problematic" and 53 percent even felt afraid.

Rosalind Croucher, chairperson of the Asia Pacific Forum of National Human Rights Institutions (APF), a committee of 25 national human rights organization, stressed on Tuesday that nurturing social cohesion should be prioritized to protect people from discrimination. 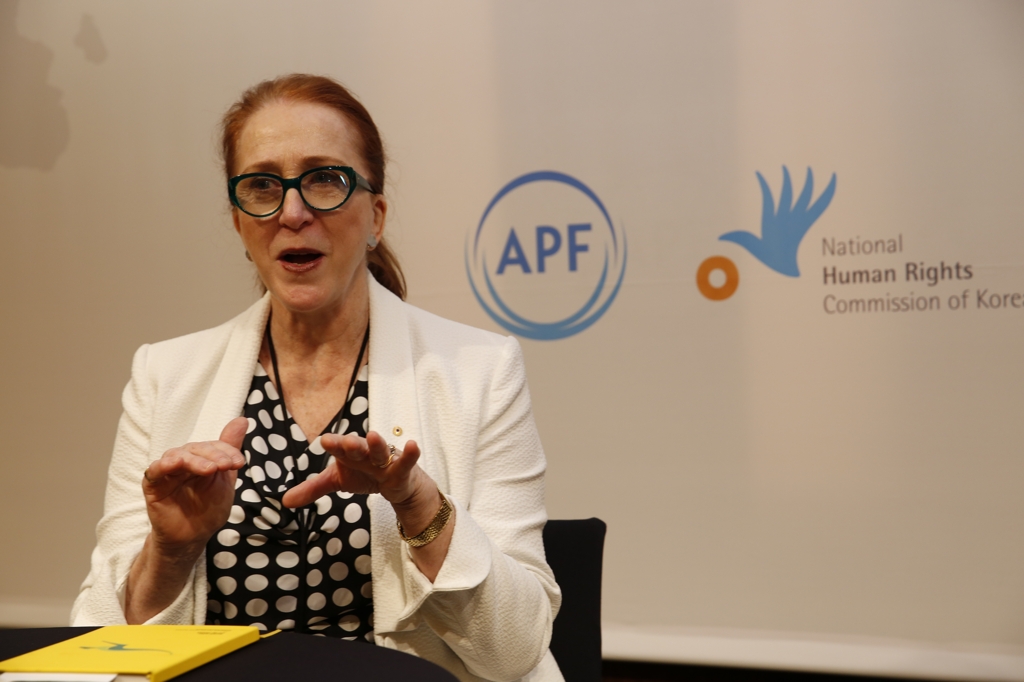 "There are times when differences are identified and targeted for hurtful things, and sometimes they can go into the area of hate ... but if we can aim at improving or reducing the number of times hurtful things might be said, by enhancing people's understanding that it's not OK (to say those things).

"You need other people, bystanders saying that's not acceptable and intervene, that's what I hope will come out from building social cohesion," Croucher told Yonhap News Agency prior to a biannual APF conference taking place in Seoul on Thursday. This year's theme is "Combating hate and discrimination: Dignity for all."

"We take our role very much as getting ahead of hate speech. There needs to be laws that deal with the worst situations one way or another ... (but) national human rights institutions focus on mechanisms building social harmony and cohesion."

Croucher noted how education on social harmony and cohesion should happen from a very early age.

The Korean human rights commission's report showed that children and teenagers were more likely to engage in hate speech due to a rampant spread of discriminatory words on social media and online game chat rooms.

"Building social cohesion starts with kindergarten children. If it's a message that people get right from when they were little and gets reinforced through their high school years and into adult life ... to create an understanding is a long-term project," she said, noting how long these education initiatives can take.

"But you can't stop. You have to keep pushing little by little, one person by another, one group by another, over time you build greater cohesion."