SEOUL, Sept. 3 (Yonhap) -- An outdoor exhibition at the royal palace of Deoksu in central Seoul will go back in time to a century ago to explore city development visions by architects from that time period, a national museum said Tuesday.

The exhibition, "Unearthing Future," will kick off on Thursday on the premises of Deoksu Palace as part of the outdoor exhibition series by the National Museum of Modern & Contemporary Art (MMCA), which operates a museum branch at the Joseon-era palace.

The exhibition brought five Asian architects and architect teams back to the year 1919 to envision a future city from the point of view in that era.

The five teams encompass Korea-based OBBA and Obra Architects, as well as Bureau Spectacular from Taiwan, CL3 from Hong Kong and Space Popular from Thailand. 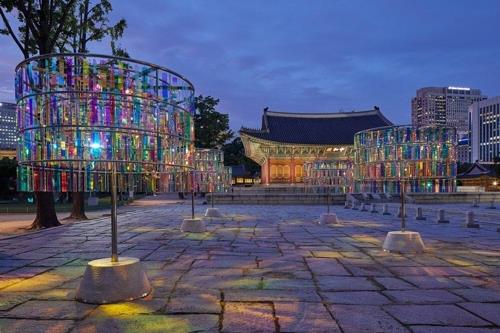 OBBA will present colorful architectural installations in the front yard of the palace's Junghwajeon building, a site of court banquets and royal ceremonies.

The installations, "Daehan Yeonhyang," or Korean court banquets in English, were inspired by ornate traditional royal sun shades that were used in the front yard space for royal banquets.

"The work interacts with ever-changing wind via dichroic films to simultaneously scatter light and cast ornate shadows resembling a dance," according to the MMCA.

Lee So-jung, the director of OBBA, said during a press conference in Seoul to promote the exhibition on Tuesday that the project "was designed to turn the space of sadness into the stage of pleasure in the shared public memory of history," referring to the last recorded royal banquet held at the scene in 1902, when the country, the Korean Empire, was just years ahead of Japan's 1910-45 colonization. 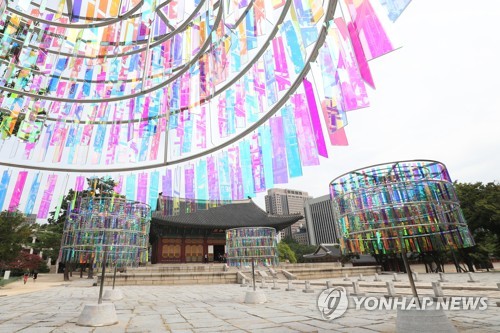 In the front yard of Hamnyeongjeon, the king's resting place, CL3 will display furniture works that combine the design of royal furniture from a century ago with experimental contemporary design, according to the MMCA.

Bureau Spectacular, whose work was featured by the Taiwanese booth at the 2014 Venice Biennale of Architecture, will set up an installation in front of the palace's landmark fountain.

Arranged jointly with the Cultural Heritage Administration, the exhibition will go on until April 5, 2020.