During the meeting with Ri Su-yong, vice chairman of the ruling Workers' Party of Korea's Central Committee, Wang was quoted as saying that the two countries should boost cooperation in various sectors as agreed by their leaders.

Wang also said that China's development and prosperity cannot be hindered by any country, amid a trade row with the United States. He added that China and North Korea should protect their mutual interests, according to the ministry.

It has not been confirmed whether Wang had a meeting with Kim.

Geng Shuang, spokesperson of China's foreign ministry, said Beijing will share information "at the right moment" on whether and when Wang will meet the North's leader.

On Tuesday, Wang visited the Martyrs Cemetery of the Chinese People's Volunteers in Anju, South Pyongan Province, according to the Korean Central News Agency (KCNA), in a move to highlight the "blood ties" between the two countries.

The cemetery is known to be a place where the remains of Chinese soldiers who fought alongside North Koreans during the 1950-53 Korean War are buried. Wang laid a wreath and held a moment of silence in memory of the war dead, the KCNA said.

On Monday, Wang met his North Korean counterpart, Ri Yong-ho, in Pyongyang and discussed regional security and the denuclearization of the Korean Peninsula and agreed to continue close cooperation and communication on various issues.

His visit to Pyongyang comes as North Korea has been ramping up criticism of the United States amid a prolonged impasse in their nuclear talks. Last week, Pyongyang's First Vice Foreign Minister Choe Son-hui said expectations for talks with the U.S. are fading away.

China and North Korea have been showing off their strong relations, particularly since Xi's trip to Pyongyang in June, which was the first visit by a Chinese head of state to North Korea in 14 years. Kim has visited China four times since March 2018. 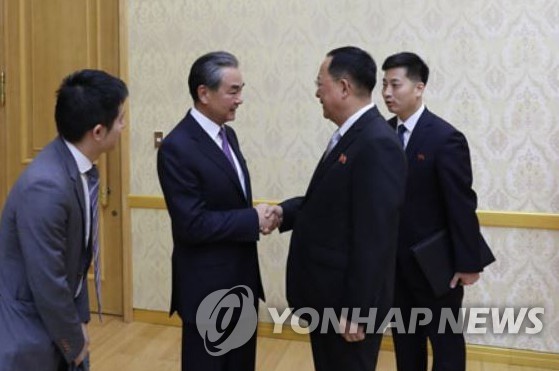