SEOUL, Sept. 6 (Yonhap) -- A new cultural complex will open on a Han River island in the heart of Seoul this month, providing citizens with more opportunities to enjoy music and other cultural performances, the government of Seoul said Friday.

The Seoul Metropolitan Government said it will open the music-themed complex on Nodeul Island, an uninhabited artificial island in the Han River that has an ecological park, on Sept. 28. 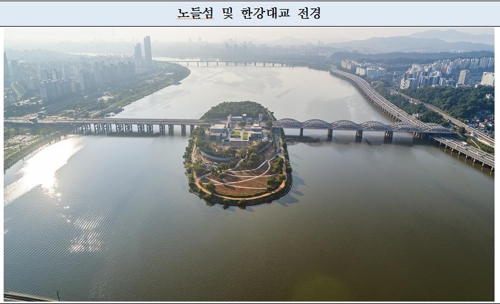 Nodeul Island, located between Seoul's Yongsan and Dongjak districts, can be easily accessed by car or on foot via the Hangang Grand Bridge but has largely been abandoned and forgotten since its formation during the construction of the bridge in the 1920s. Parts of the island had long been used as tennis courts or vegetable gardens for some citizens. Nodeul Island, nine times the size of Seoul Plaza, covers an area of 150,000 square meters.

In 2012, the Seoul government began discussions on building resort, tourist or cultural facilities and finally decided to build a music-based integrated cultural complex in 2016. The construction work began in October 2017.

The new cultural complex will include an outdoor music space that can accommodate about 3,000 people and a 456-seat live pop concert hall. 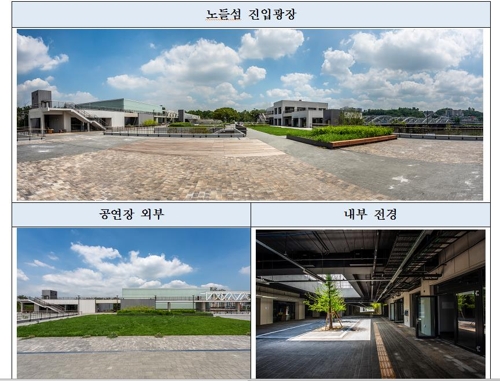 "The construction work has been conducted in a way that maximizes natural beauty," said an official at MMK Plus, which designed the new cultural complex.

"The buildings were not designed splendidly or uniquely in order not to harm the island's landscape and environment and obstruct views of Seoul's landscape," the official said. As part of the efforts to protect the environment, for instance, a habitat of narrow-mouthed toads was moved from the island's western tip to the eastern tip.

The metropolitan government has allowed social enterprises to run restaurants and other commercial facilities on the island.