SEOUL, Sept. 5 (Yonhap) -- Environmental activist Park Grimm was a senior in high school when he first wandered beneath the towering granite peaks of Mount Seorak in northeast South Korea. The dramatic landscape of vast forests and narrow gorges, so different from his hometown Seoul, consoled him during a difficult time in his life, inspiring him to return each year and, decades later, to make the mountain his home.

But while countless visitors have come to share Park's love of Mount Seorak, which South Koreans have named their favorite mountain, its popularity has also turned it into a battleground in a yearslong debate over whether to build a cable car to one of the mountain's highest peaks.

The Ministry of Environment will soon have the last word in that debate when it announces its final decision on whether to allow the installation of the cable car in a southern area of the national park.

At present, it appears likely that the ministry under the liberal Moon Jae-in administration will cancel the cable car after an environmental effects committee concluded that supplemental plans did not include adequate measures to protect endangered flora and fauna like the Korean goral, a goat-like animal that lives along the intended route.

Cancellation would be a significant victory for environmentalists like Park who have fought for years to stop the project. To them, the cable car represents a betrayal of the national parks' mandate to conserve biodiverse ecosystems in a country where development and population growth have left just a few scattered islands of true wilderness.

"The question is whether national parks will become tourist entertainment parks or if they'll be preserved as national parks for posterity," said Park, who throughout August led a sit-in protest in central Seoul against the cable car. Yangyang County has sought to build a cable car in the southern section of Mount Seorak since 1995, according to Kim Cheol-lae, an official with Yangyang County's cable car promotion team. The goal, he said, is to reduce foot traffic on the mountain's eroding trails, which become clogged with hikers during the busy fall season, as well as to stimulate the local tourism industry.

Those efforts got a boost in 2009, when the conservative Lee Myung-bak administration extended a limit on cable car length in nature protection zones from 2 kilometers to 5 kilometers.

The county subsequently proposed a 4.6-km cable car to the park's highest point, but the authorities rejected it in 2012 for going too close to the peak. A second proposal to a nearby ridge was also denied in 2013 for infringing upon a goral habitat.

Then in 2015, an environment ministry committee gave conditional approval to a third proposal to build a 3.5-km cable car from the county's Osaek area to a site below the 1,610-meter-high Kkeutcheong Peak.

Construction was to be completed ahead of the 2018 Winter Olympics in PyeongChang at a cost of 46 billion won (US$39 million), with a report estimating that the cable car would bring in 152 billion won and create more than 900 jobs.

Instead, a protracted administrative and legal battle ensued as environmentalists sought to block the plan.

In late 2015, following the conditional approval, activist groups and local residents who opposed the cable car plan filed a lawsuit demanding its nullification, contending that such facilities should not be constructed in protected areas of the Baekdudaegan mountain range. The Seoul Administrative Court dismissed the lawsuit in January of this year.

In 2016, the Cultural Heritage Administration (CHA) condemned the cable car for its anticipated negative impact on cultural assets, as well as wildlife. But an appeals commission, siding with Yangyang County, overruled the CHA's objections the following year.

Despite the headwinds, Kim said Yangyang County has continued to push for the cable car due to strong local support. A 2015 Gallup Poll found 61 percent of Gangwon Province residents in favor of the project and only 20 percent against, with 43 percent for and 35 percent against nationally.

The county, he said, intends to appeal if the cable car is rejected.

"We've been working in the cable car business for 30 years, and per the request of citizens, we've been fighting for this business, because of the citizens," Kim said. 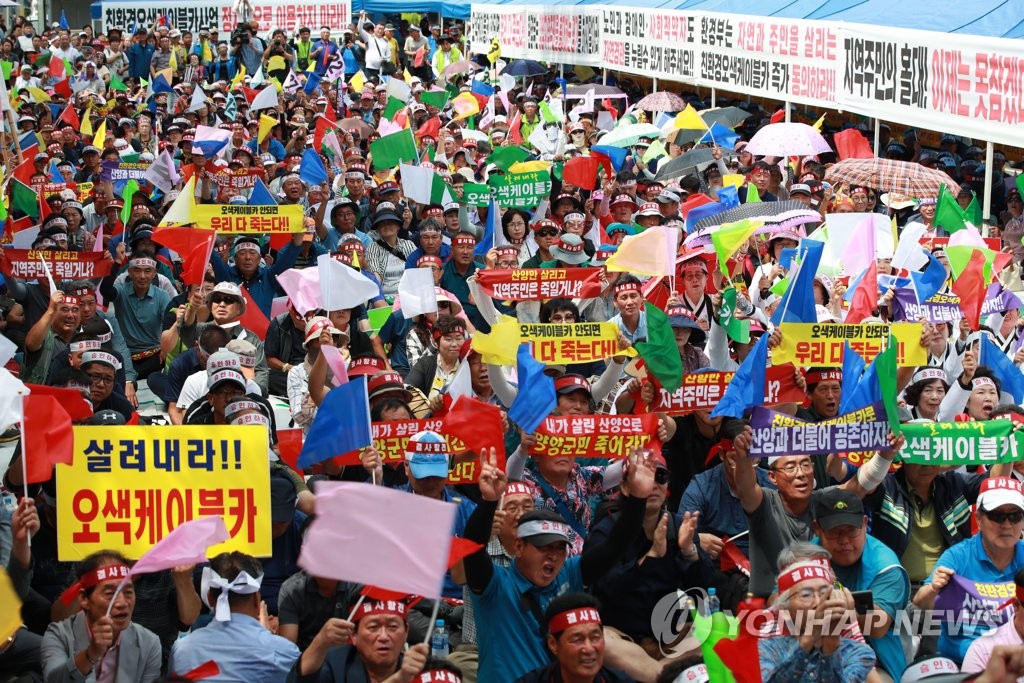 At a rally last week near the presidential office Cheong Wa Dae, Yangyang County residents who support the cable car donned red headbands and held signs that made clear their view of what was at stake.

"If the cable car is not allowed, we all die."

Though supporters have offered a number of arguments for the cable car, including that it would improve accessibility for the elderly and disabled, the rally seemed to suggest that many locals care most about its potential economic benefits.

Such local support for development projects like the Mount Seorak cable car has its roots in the 1960s, when the South Korean government founded the park system in connection with a push to promote domestic tourism.

David Mason, a professor of Korean cultural tourism at Sejong University in Seoul, explained that one of the main objectives was to spur the economy in impoverished mountain communities, where generational poverty might have otherwise left villagers receptive to communist propaganda.

The authorities allowed locals to establish "minbak," farmer's homes with accommodations for tourists, and those developed into restaurant and motel clusters that are still found near national and provincial parks throughout the country, according to Mason.

"That was a big part of it, getting money to these poor villagers so that they would be more integrated into national society," he said, adding that officials gave preference to locals when awarding business licenses.

The result was that Korea's new park system, while based on the national park concept originating in the United States, was initially seen as existing more for public recreation than environmental protection, in particular from the perspective of locals, according to Youn Yeo-chang, professor of global environmental management at Seoul National University. 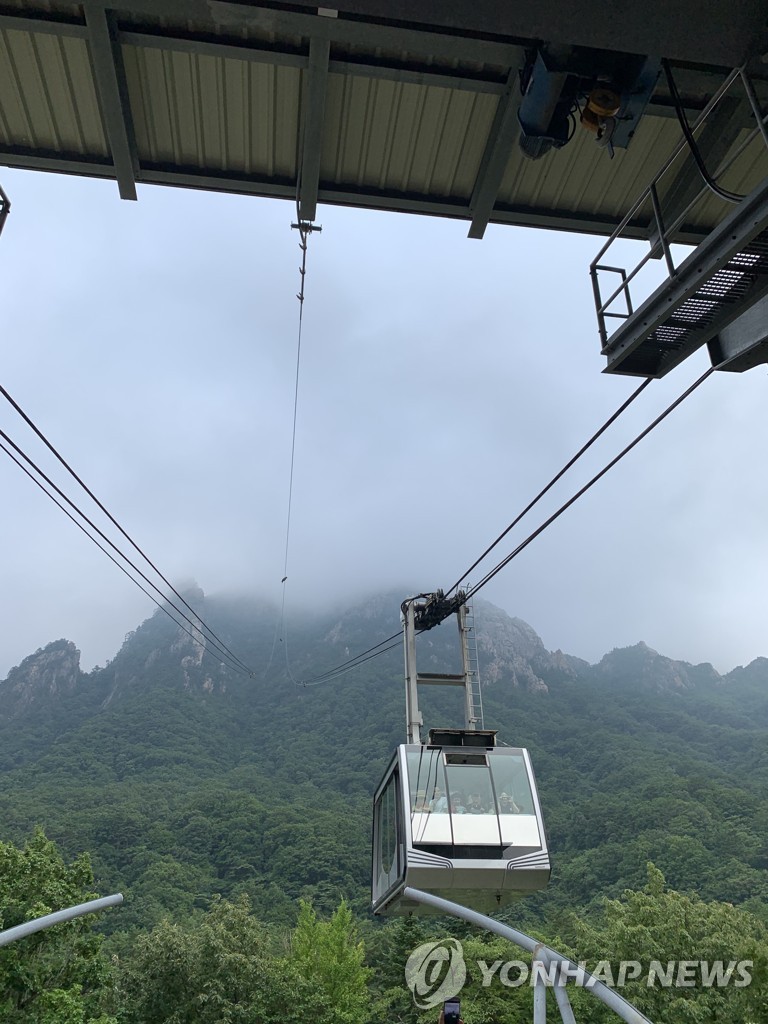 Consistent with that focus on recreation, Mount Seorak became the first national park to install a cable car, still operating in its main area, in 1971. Cable cars were also built at Mount Naejang, a national park in the southwest famous for its fall foliage; Mount Deokyu in North Jeolla Province; and on mountains in several provincial parks.

Communities near the national parks, however, have continued to look to the parks to drive local economic growth, chafing at land use restrictions intended to protect biodiversity.

Over the past decade, several municipalities have sought unsuccessfully to build cable cars at national parks, including at Mount Bukhan in northern Seoul, and Mount Jiri, the highest peak in mainland South Korea, in the south.

The outcome of the Mount Seorak cable car issue could affect whether local governments continue to pursue such projects in the near future, observers said.

Regardless of what the environment ministry decides, the underlying issues that have contributed to the cable car controversy are likely to remain.

Overcrowding, the original reason Yangyang officials say they proposed the cable car, has been a serious problem at national parks near population centers, particularly since the government abolished the entrance fee system in 2007.

Though the policy has been popular, the number of visitors has skyrocketed, with nearly 44 million people visiting Korean national parks last year, including 3.2 million to Mount Seorak.

The increase has left the national park system taxed far more than those in other countries. According to environment ministry statistics, there were 9,947 visitors for every square kilometer of national park land in 2015, as opposed to 0.36 person per square kilometer in the United States and 233 persons in Finland.

Meanwhile, the national parks have grown in importance for biodiversity conservation, containing 64 percent of all nationally designated endangered species and 47 percent of all species in South Korea, according to the 2016 book "National Park Understanding and Management." 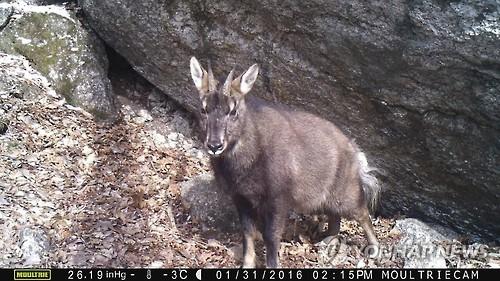 The increased use at protected areas led professor Youn to argue that the parks should reintroduce entrance fees and consider charging more for visitors to ascend to ecologically delicate areas at higher elevations.

But Youn, who opposes the Mount Seorak cable car, also emphasized the need to address local economic interests if South Korea hopes to arrive at some sort of consensus for conservation in the long term.

One option, he said, might be to develop recreational facilities in national forests in order to better establish the more ecologically important national parks for conservation.

"I think the national park system has been accepted by Korean society as a park, not an ecosystem reserve," he said, "so maybe we need to have different institutions than national parks in order to protect ecosystems ... we are now very confused about what a national park is."

For now, the distinctive biodiversity and scenery of Mount Seorak and other national parks remain the source of their appeal to environmentalists and developers alike, presaging continued conflict between the two sides.

"Mount Seorak," the activist Park said, "is a mountain that's tragic because of its beauty."