SEOUL, Sept. 5 (Yonhap) -- Defense Minister Jeong Kyeong-doo pledged Thursday to build strong military capabilities to back the government's efforts to achieve peace and prosperity on the Korean Peninsula and beyond.

"Despite last year's achievements for peace on the Korean Peninsula, many challenges still lie ahead, such as military tensions heightened by North Korea's recent firings of short-range ballistic missiles," Jeong said during an opening address at the eighth Seoul Defense Dialogue (SDD).

Stressing that South Korea is seeking to build "peace through power," the minister vowed to "ensure strong defense power to protect our country and the people, to support the government's efforts (for diplomacy), to achieve peace and prosperity on the Korean Peninsula, Northeast Asia and the world."

Though the two Koreas "were not able to overcome military confrontation and tensions overnight which have lasted for the past 70 years," the minister said South Korea will continue endeavor to "build mutual trust with patience and prudence" with Pyongyang.

North Korea has conducted a series of weapons tests, involving new types of short-range ballistic missiles, in recent months amid stalled talks with Washington on its nuclear weapons program. 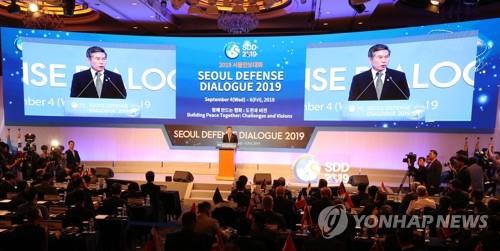 The minister also voiced concerns over "intensifying competition among countries in the region which pursue their own national interests by creating conflicts with neighboring countries," seen as a thinly-veiled criticism of Japan.

"In order to resolve a wide range of issues, it is required to have dialogue to build trust and share their vision for security cooperation to seek sustainable and practical solutions," Jeong noted.

In his congratulatory remarks, Prime Minister Lee Nak-yon vowed Seoul's continued endeavors for the swift resumption of Washington-Pyongyang denuclearization dialogue, which would affect the establishment of a permanent peace on the peninsula.

Though U.S. President Donald Trump and North Korean leader Kim Jong-un agreed in June to resume the talks and the U.S. has suggested working-level dialogue, Pyongyang has been dragging its feet.

U.S. Forces Korea (USFK) Commander Gen. Robert Abrams also attended the ceremony as a U.S. representative, but he did not make any official remarks. He also did not answer questions from reporters.

His presence drew attention, as the U.S.' belated reply to South Korea's invitation to the security forum sparked speculations over a possible rift in the alliance following Seoul's decision to terminate a military information-sharing pact with Japan.

The U.S. has repeatedly expressed disappointment and concern, as the bilateral pact is seen as a rare platform to promote the trilateral defense cooperation among Seoul, Washington and Tokyo in the region.

"Our decision was based upon the fact that we cannot exchange sensitive military information with a country that does not trust us in terms of security," Park said.

"If Japan reconsiders its trade restrictions against us, we also can positively review the decision on GSOMIA. We are striving to have dialogue with Japan," he added.

The three-day SDD, which will continue through Friday, brought together hundreds of officials and experts from around 50 countries and international organizations to serve as a venue for discussions and defense diplomacy for security cooperation, according to its organizer, the defense ministry. 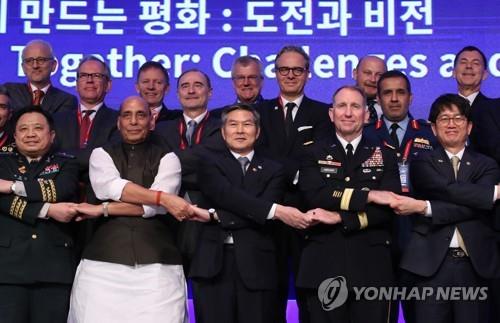