SEOUL, Sept. 5 (Yonhap) -- Kazakhstan has promised to cooperate with South Korea for a smooth repatriation of remains of one of the legendary Korean independence fighters, Hong Beom-do, Seoul's defense ministry said Thursday.

Shpekbayev Ruslan, first deputy of the general staff of Kazakhstan's armed forces, made the commitment Wednesday during talks with South Korea's Vice Defense Minister Park Jae-min in Seoul. Ruslan was in Seoul to attend the Seoul Defense Dialogue.

Hong Beom-do (1868–1943), who was general commander of the Korean independence army during the 1910-45 Japanese colonial rule, claimed victories in battles against Japanese forces in Manchuria. He died in Kazakhstan and is still buried there.

As part of a project to repatriate the remains of former independence fighters from abroad, President Moon Jae-in has pledged to continue efforts to bring back Hong's remains. In April, two Korean independence fighters were laid to rest here after their remains were returned from the Central Asian country.

"The Kazakhstani officer praised South Korea's efforts for the denuclearization of the Korean Peninsula and vowed continued support," the ministry said in a release.

The two sides also agreed to strengthen their strategic communication and expand cooperation in peacekeeping operations and personal exchanges, among others, it added. 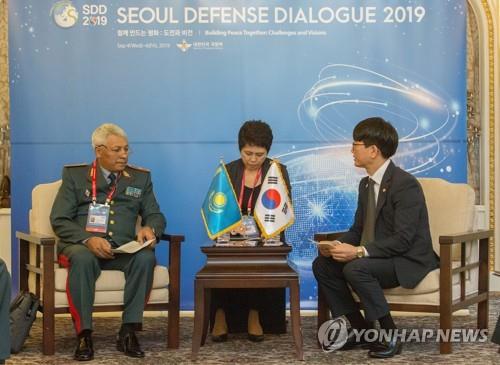 Holding a separate bilateral meeting between Park and Canadian Deputy Defense Minister Jody Thomas, the two sides vowed joint commitment to peace on the Korean Peninsula, as well as to the excavation of remains of soldiers killed during the 1950-53 Korean War.

During the three-year conflict, where Canada sent its troops, some 40,670 international service persons were killed and 4,100 became unaccounted for. About 137,800 Korean soldiers were also killed and 25,000 went missing, according to the ministry's records.

The bilateral meetings took place on the sidelines of the eighth Seoul Defense Dialogue under way in Seoul through Friday. 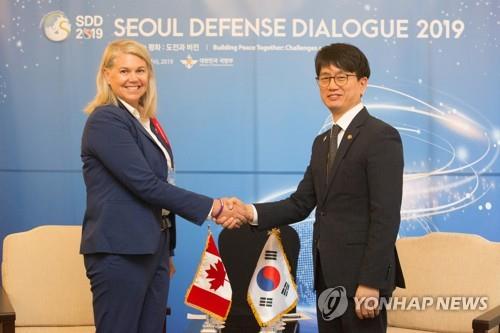