VIENTIANE, Sept. 5 (Yonhap) -- After talks with Laotian leaders, South Korean President Moon Jae-in made public his strategy Thursday on closer partnerships with countries around the Mekong River, as Seoul is striving to establish a firm foothold in the region.

"The entire world is now paying attention to the development of the Mekong region," Moon said in a special statement. He was visiting a Mekong area in Vientiane along with Laotian President Bounnhang Vorachith. A South Korea-Laos joint project is underway there for water security and integrated river basin management. 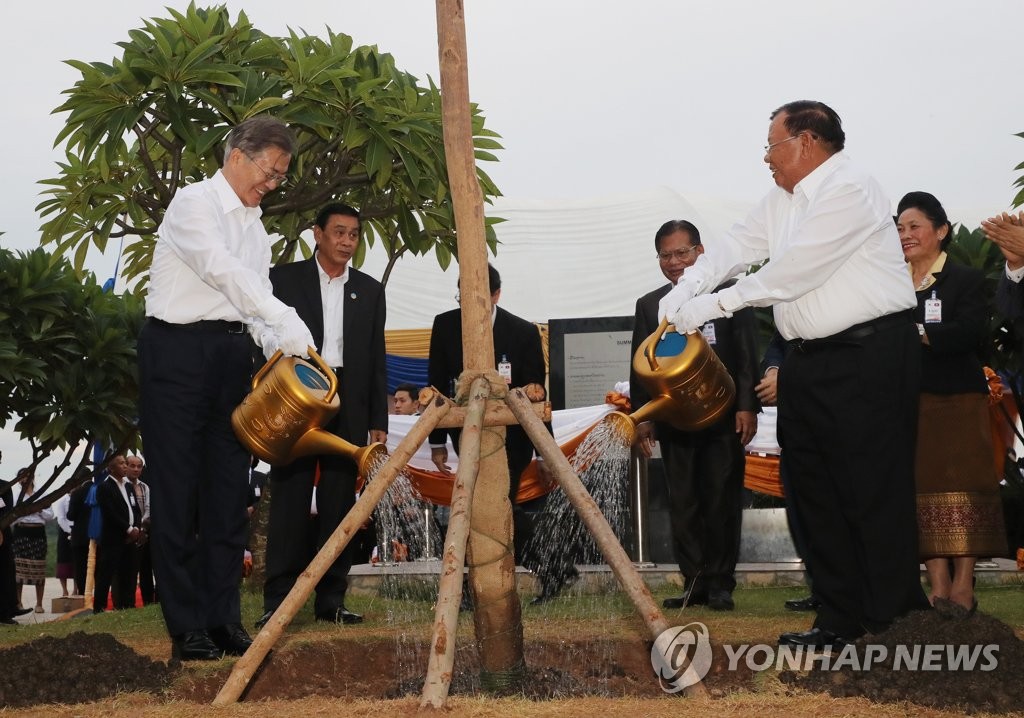 Moon stressed that the dynamic nature and growth potential of Mekong countries and the spirit of mutual respect, above all, will open a new future of the world.

He presented a three-point "Mekong vision" for the goal: prosperity based on sharing experience, sustainable growth and East Asia peace and coprosperity.

South Korea has lots of experience in the development of farm villages and plans to share its know-how on manpower training and growth with other nations. It's also willing to cope with the Fourth Industrial Revolution by sharing technology with them, according to Moon. 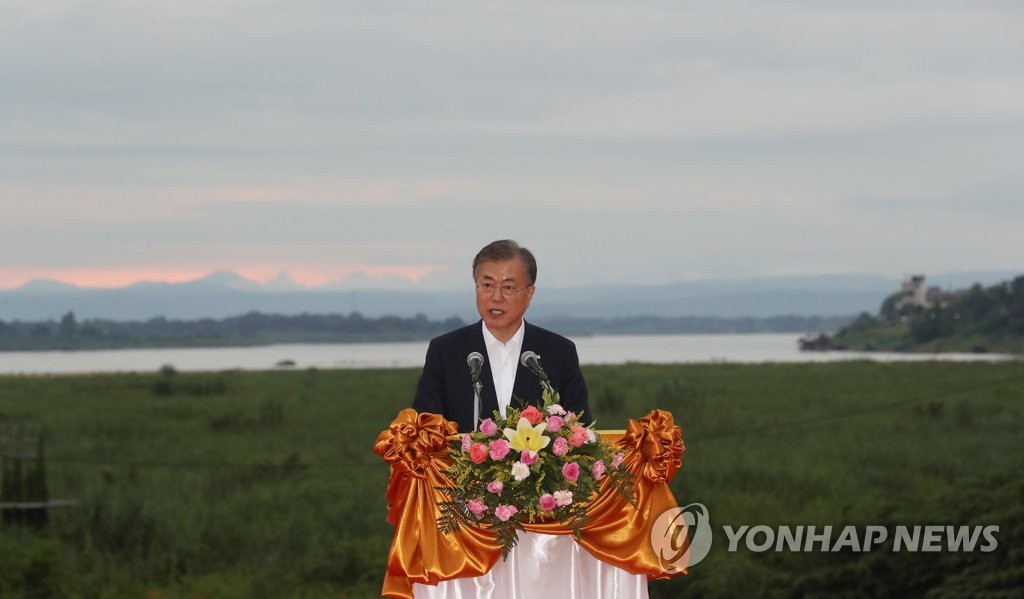 He chose Laos as the venue for the announcement of the vision. The country is traversed by the river, which makes it rich in water resources. The river flows 1,835 kilometers through Laos from north to south, earning it the nickname "battery of Southeast Asia."

On the sustainable prosperity vision, the president cited the need to protect the Mekong River from climate change and natural disasters.

He suggested the green growth strategy to connect Mekong's resources with bio and medical sectors.

As Mekong countries are seeking coprosperity as South Korea does, Moon pointed out, a priority is to set up various infrastructure.

"South Korea will support the construction of roads, bridges, railways and ports among Mekong nations," he said.

He expressed hope for additional discussions on the vision at the inaugural South Korea-Mekong summit, which will involve Cambodia, Myanmar, Laos, Vietnam and Thailand, to be held in Busan on Nov. 27.

It will be followed by a two-day South Korea-ASEAN special summit in the city to commemorate the 30th anniversary of bilateral dialogue. 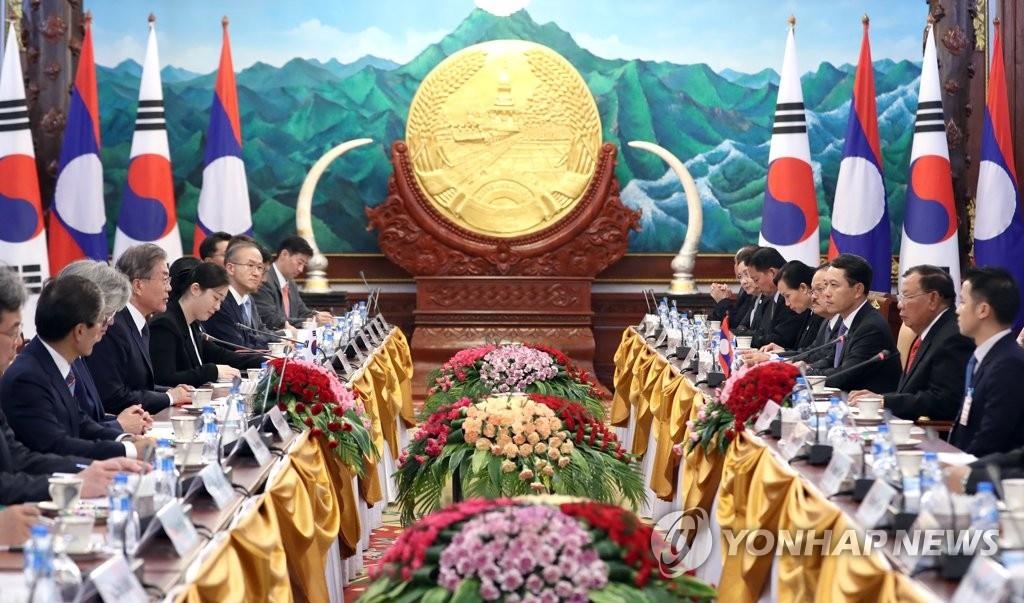 Earlier Thursday, Moon had summit talks with the Laotian president.

They talked about a catastrophic dam collapse in southern Laos last year, which killed dozens of residents and displaced thousands of others. A saddle dam of the Xe Pian-Xe Namnoy hydropower project collapsed, in which a joint venture between SK Engineering & Construction and Korea Western Power Corp. is participating.

In response, Moon expressed his gratitude for the Laotian authorities maintaining trust in South Korean companies despite the case.

"I hope that relations between the two nations will get more solid, just as the ground hardens after rain," he told the Laotian president.

Moon also proposed cooperation in efforts to remove unexploded munitions in Laos from the Vietnam War. Moon said he knows that there are many duds even in the Plain of Jars listed as a UNESCO World Heritage site along with South Korea's Seowon educational institutions of the Joseon Dynasty (1392-1910). 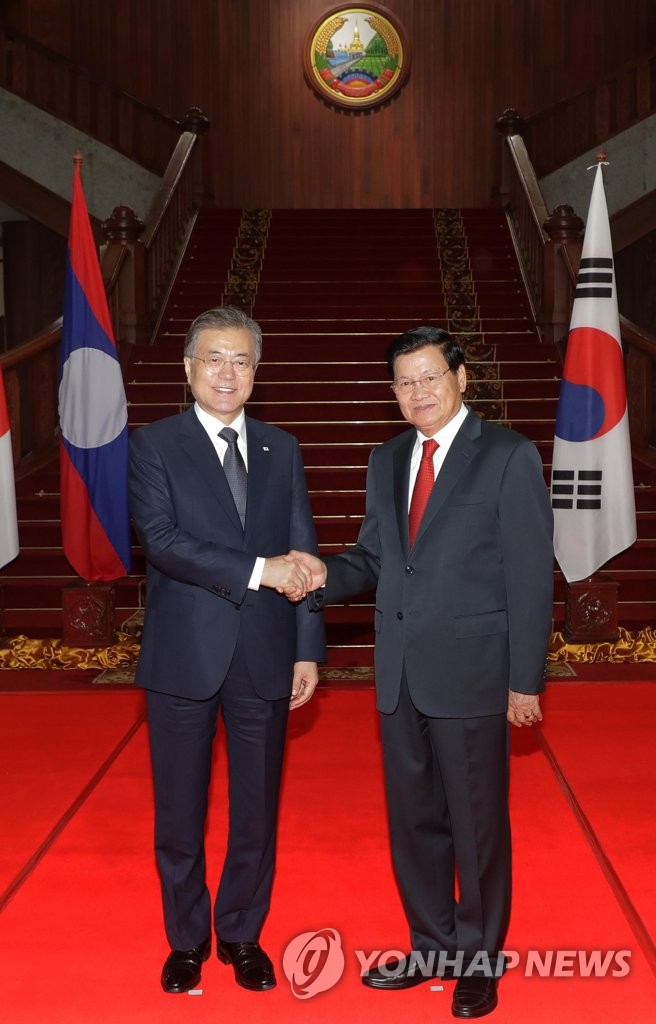 The dud issue was raised in Moon's meeting with Prime Minister Thongloun Sisoulith as well.

Moon said South Korea has suffered a similar problem in the wake of the Korean War, adding his government is trying to clear landmines from the Demilitarized Zone (DMZ) with North Korea and create a peace village there, Ko said.

The prime minister described South Korea as a "good model" for the economic growth of Laos.

He said Laos, which has diplomatic ties with both Koreas, will serve a "bridge role" to help establish peace on the peninsula.

He also expressed appreciation for former South Korea Korean baseball player Lee Man-soo for endeavoring to spread the gospel of baseball in Laos.

Lee, who was a star catcher of the Korea Baseball Organization, is campaigning to construct the first baseball stadium in Laos.

South Korea and Laos signed four memorandums of understanding (MOUs), including one about Seoul's plan to offer US$500 million through the Economic Development Cooperation Fund (EDCF) between 2020 and 2023.

The other MOUs call for closer cooperation on agriculture, startups and ICT. 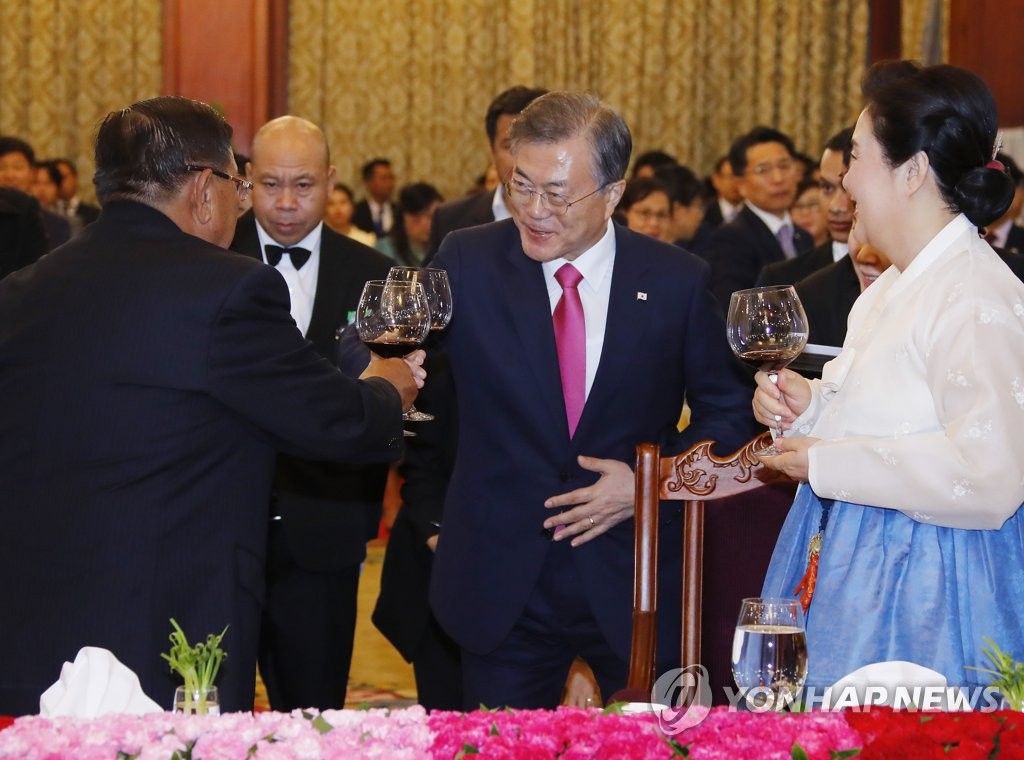 Moon arrived in the Laotian capital earlier in the day, becoming the first South Korean leader to make a state visit to Laos since they established diplomatic ties in 1974. The next year, South Korea severed diplomatic relations with Laos, which adopted communism, and reestablished ties in 1995.

Vientiane is the last stop of his weeklong regional swing that also took him to Thailand and Myanmar. He's to return home on Friday. 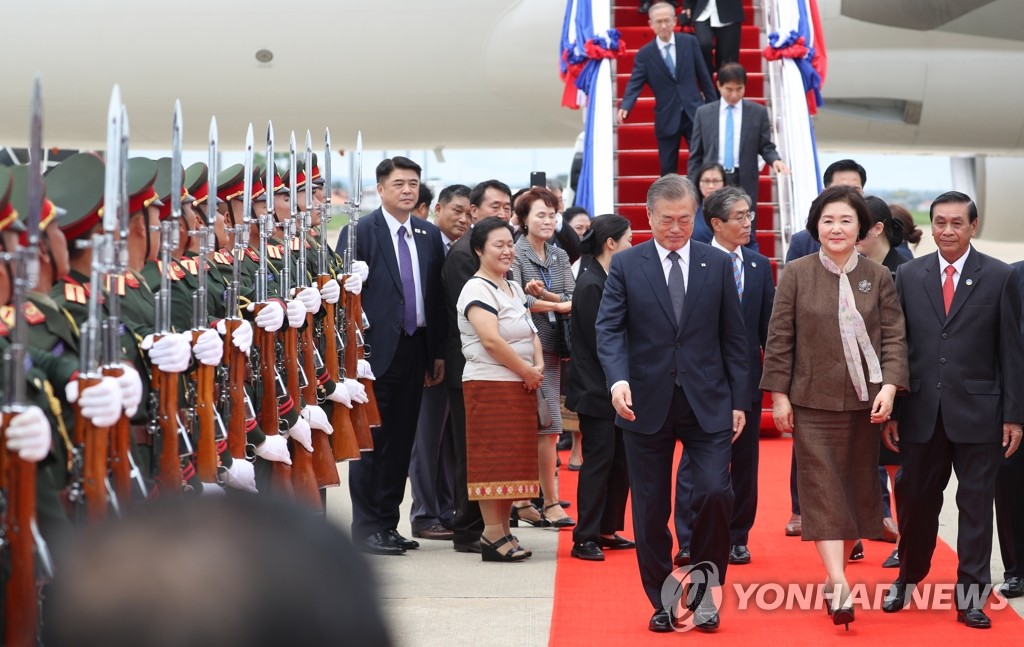