Ri Ryong-nam made the remark to reporters in Vladivostok after meeting with Russian government officials. Ri arrived in the Far Eastern port city earlier this week to take part in the 5th Eastern Economic Forum.

"South Korea should implement issues specified in the joint declaration and Panmunjom declaration," he said when asked about the prospect of the resumption of inter-Korean talks, referring to the deals reached by President Moon Jae-in and North Korean leader Kim Jong-un in their summits in April and September.

"How can that (the talks) happen when it doesn't implement (the agreements)?" he responded.

Inter-Korean relations made significant strides last year, with Moon and Kim holding three summits, but the reconciliation process has reached a deadlock as the denuclearization negotiations between the North and the United States have made little progress.

North Korea has been ramping up its pressure on South Korea, taking issue with Seoul's joint military exercise with the U.S. and the introduction of new weapons, such as F-35A stealth fighters, on its soil. 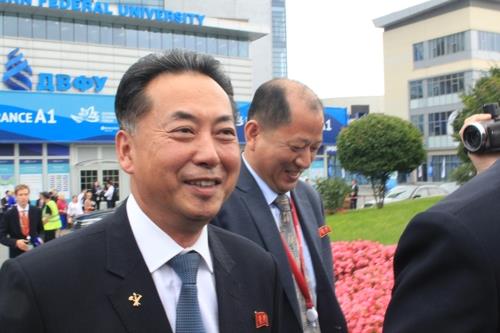