SEOUL, Sept. 5 (Yonhap) -- The summer season in the Korean popular music scene has traditionally been a market exclusively reserved for girl bands. This summer, however, female K-pop groups have surrendered their reign to unusually high-performing ballads.

A heartrending breakup song, "Drunk on Love," a collaboration by career balladeers Jang Hye-jin and Yun Min-soo, topped the monthly Gaon digital music chart for July, dominating the music scene at the heart of the summer.

In the July chart's second and third places were "Thank You for Goodbye" and "Your Regards," both sentimental ballads by young female singers, Ben and Song Ha-yea respectively.

Other chart-leading titles included "Speechless" -- a song from the 2019 hit Disney musical fantasy "Aladdin" -- on top of the ballads "To Be Honest" by Kim Na-young, "If There Was Practice In Love" by Lim Jae-hyun and "Pocha" by Hwang In-wook.

Of the chart's top 10, "Snapping," a bouncy dance number by Chungha, was the only music by a K-pop idol, whose careers are famously characterized by flashy dance performances and loyal fandoms.

This marks an unusual change for the summer music market, which has been invariably ruled by A-list girl bands including, most recently, BLACKPINK, TWICE and Red Velvet.

The same Gaon monthly chart for July last year was topped by "Ddu-du Ddu-du," a hypnotic dance song by BLACKPINK, which had amassed 900 million YouTube views as of Thursday, a record among K-pop bands.

Another globally popular girl band, TWICE, came second with an uplifting summer dance song, "Dance the Night Away," adding to the summer season chart dominance by star female bands in 2018.

This was after all-girl quintet Red Velvet stormed the music charts in July 2017 with their best-known song, "Red Flavor," followed by BLACKPINK's "As If It's Your Last" and Apink's "Five."

The unprecedented lack of girl bands on the summer music scene at home this year came as most K-pop idol bands reached out to global fans.

Since June, TWICE has been on its latest world tour, "Twicelights," which took the band to American cities for performances for the first time since its debut in 2015. Following its latest performance in Kuala Lumpur, the group is scheduled to kick off the Japanese leg of the tour in October.

Members of BLACKPINK are also immersing themselves in a globe-trotting concert tour. Following three days of concerts in Bangkok in July, BLACKPINK is set to arrive in Tokyo on Dec. 4 for the first stop in the next leg of their world tour. 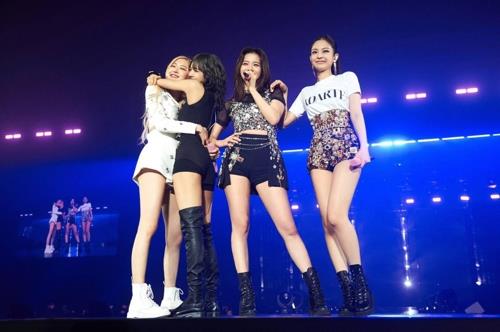 "Those who seriously influence the music market are fans and their taste. And music consumers' choice this summer was sentimentally appealing ballad songs," popular culture critic culture Ha Jae-keun said, referring to the changing trend.

"In the absence of girl bands' releases of typically energetic summer songs this season, music consumers were focused on ballad numbers that are beautiful in melody and moody regardless of season," he noted.