Moon made a pitch for the New Southern Policy less than three months ahead of a special summit with ASEAN in Busan, his hometown. It would be the largest diplomatic event to take place in South Korea under the Moon administration.

He has kept his word to visit all the 10 ASEAN member states in his presidency, becoming the only South Korean president to do so. He earlier traveled to India, another key partner in the New Southern Policy initiative.

"It reflects how important we regard the ASEAN and India," Joo Hyung-chul, a Cheong Wa Dae adviser for economic affairs, said at a press briefing here. Seoul is in a speedy drive for strong, strategic partnerships with the ASEAN bloc, although it started later than Tokyo and Beijing.

Through this week's regional trip, Moon has laid the groundwork to push for the New Southern Policy "with stability" and demonstrated his "sincerity and determination for cooperation" with the 10 ASEAN members, Joo said. 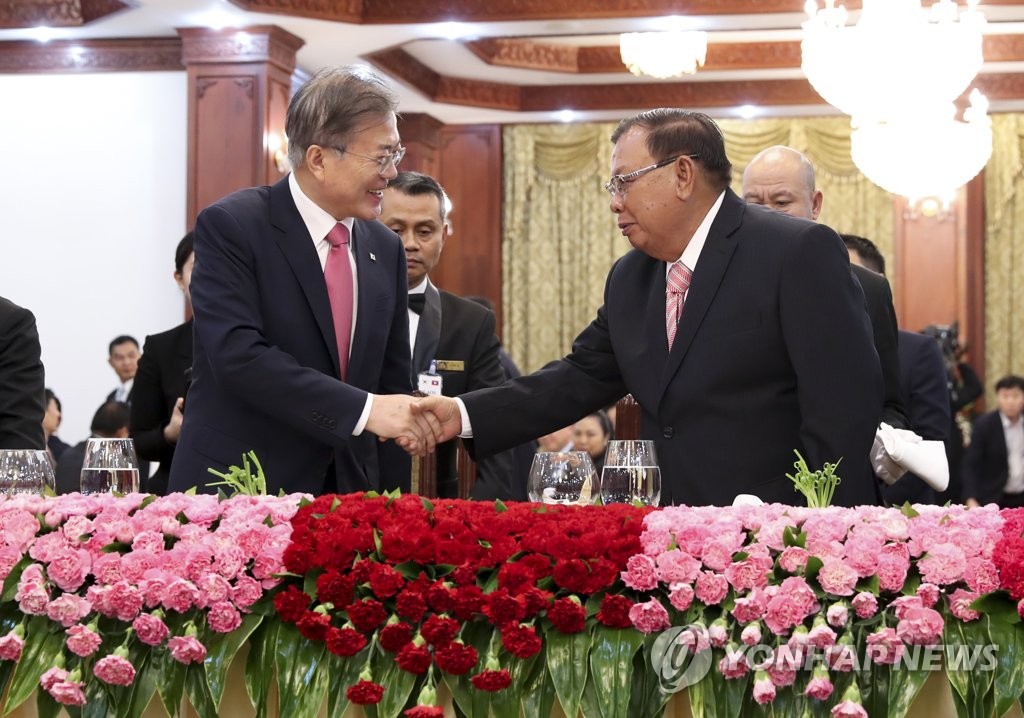 It came as Moon is facing more troubles, diplomatically, than ever, having entered the third year of his presidency.

The Korea peace process has made no further progress amid a continued delay in the resumption of North Korea-U.S. nuclear talks. Inter-Korean relations are not like in 2018, when Moon met the North's leader Kim Jong-un three times.

Seoul is in a trade fight with Tokyo stemming from a row over shared history. Washington is displeased with Seoul's decision to terminate an accord with Tokyo on sharing military intelligence. The Trump administration is heaping pressure on South Korea to pay more for U.S. Forces Korea, raising public concerns about the future of the alliance.

From the start of his liberal administration in 2017, Moon was aware of the need to diversify Seoul's diplomatic portfolio.

On a visit to Indonesia in November of the year, he declared the New Southern Policy aimed at upgrading Seoul's ties with India and the ASEAN bloc to the level of its relations with four regional powers -- the U.S., China, Russia and Japan.

"South Korea can show its diplomacy is much more than North Korea policy," said Leif-Eric Easley, associate professor of international studies at Ewha Womans University in Seoul. "It can play a middle power role, helping network countries in Asia within an updated rules-based order."

Travelling to Southeast Asia this week, Moon, in fact, focused more on strengthening bilateral cooperation than talking about North Korea.

The two sides also signed an agreement on exchanging and protecting military intelligence, which is expected to help deepen their military ties and defense industry cooperation.

Moon attended a launching show for Brand K, an official trademark for goods produced by dozens of South Korean small-and medium-sized enterprises. It's designed to capitalize on the increased popularity of Korean culture abroad in the marketing of their products. 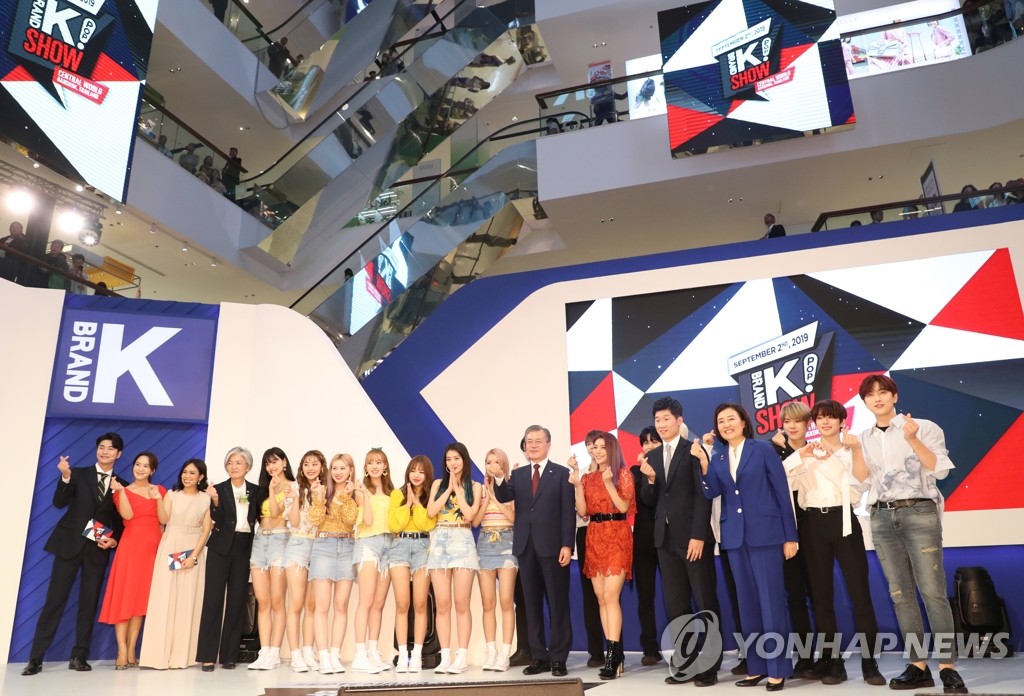 He then traveled to Myanmar, where he had talks with State Counsellor Aung San Suu Kyi and President Win Myint.

The two sides agreed to strengthen partnerships in economy, culture and development for synergy between South Korea's New Southern Policy and the Myanmar Sustainable Development Plan.

South Korea has decided to double its aid for Myanmar through the Economic Development Cooperation Fund (EDCF) to US$1 billion between 2018-2022 from the previous five years. 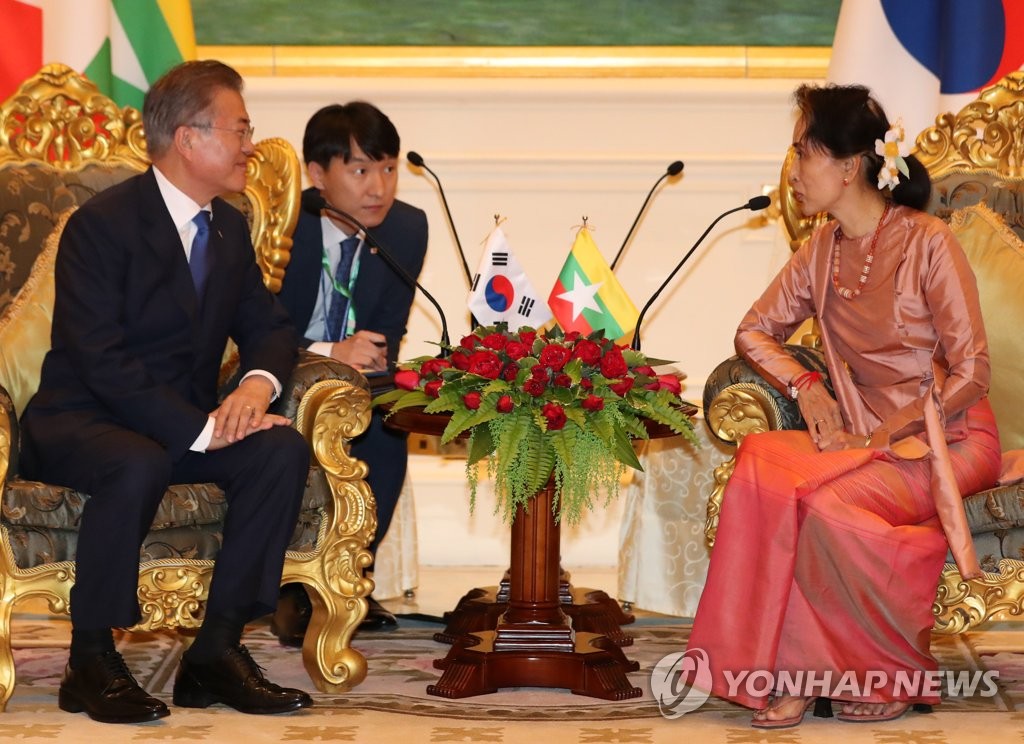 During a summit with Aung San Suu Kyi, Moon proposed cooperating in the "Myanmar peace process," which includes the sensitive issue of the Rohingya humanitarian crisis. Moon's administration supports the "safe, voluntary and dignified" return of Rohingya refugees in line with the United Nations' position.

"Middle powers diplomatically address issues of principle and values, rather than use them for propaganda or ignore them for convenience," Easley noted, "This means discussing civil-military relations with Thailand, human rights with Myanmar, and disaster prevention and response with Laos,"

On a visit the Laotian capital of Vientiane, Moon had back-to-back talks with President Bounnhang Vorachith and Prime Minister Thongloun Sisoulith. 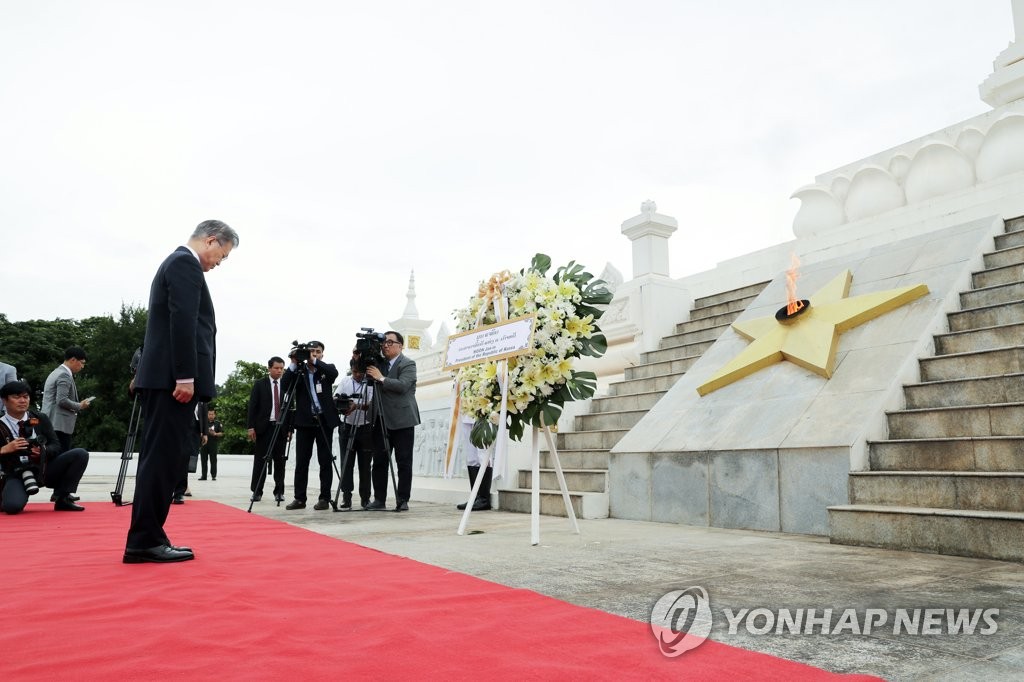 Among issues discussed was the deadly collapse last year of a saddle dam of the Xe Pian-Xe Namnoy hydropower project, in which a consortium of South Korean firms are participating. Moon pressed for closer economic cooperation despite the incident, saying, "The ground hardens after rain."

Moon also presented his vision for South Korea's longer-term teamwork with countries around the Mekong River.

He's scheduled to hold a group summit with his counterparts from Cambodia, Myanmar, Laos, Vietnam and Thailand in Busan a day after the Nov. 25-26 summit with ASEAN.

Moon plans to return to Seoul Friday afternoon and an urgent task is to make a decision on whether to appoint Cho Kuk, a former senior presidential secretary for civil affairs, as justice minister. The nominee is under fierce political attacks over a host of alleged ethical lapses.