SEOUL, Sept. 6 (Yonhap) -- India is eager for foreign companies, including those from South Korea, to participate in its arms procurement projects by maximizing its liberalized foreign direct investment policy and new guidelines, its defense minister said Friday.

"To facilitate participation of foreign companies, we have liberalized our defense foreign direct investment policy ... and adopted the guidelines that call for close participation between Indian and foreign firms for the supply of major defense systems," Indian Defense Minister Rajnath Singh said in an interview with Yonhap News Agency.

Singh also said that self-reliance in defense production is India's top priority and the country hopes to become one of the top five countries in the global aerospace and defense industries.

"We are keen that foreign companies, including from South Korea, participate in the 'Make in India' initiative," he said.

One of the most promising export items from South Korea to India is the K-30 anti-aircraft defense system, named Biho, which is developed by Hanwha Defense Systems Corps. in cooperation with LIG Nex1 Co.

Though the Indian army last year selected the Biho system as a sole candidate for acquisition, the project has been delayed after Russia, one of the bidders, has raised questions over the bidding process and called for it to be restarted, according to officials.

Later in the day, Singh is scheduled to meet with officials from South Korea's major defense companies, sources here said.

According to data by the Stockholm International Peace Research Institute, India was the world's second largest buyer of weapons, after Saudi Arabia, between 2014 and 2018, accounting for 9.5 percent of the global total. 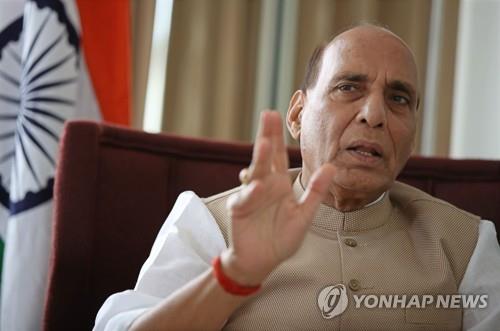 Asked about North Korea's nuclear and missile programs and alleged connections between the North and Pakistan in those technologies, Singh said any proliferation and linkages to India's neighborhood in those issues is "a matter of serious concern."

"India's consistent stance has been that we strongly oppose any steps by North Korea that violate its international commitments to pursue the path of denuclearization," Singh said, calling for holding "accountable all those who have extended support to its nuclear and missile programs."

The minister then voiced India's strong support for Seoul's peace process aimed at denuclearizing North Korea and bringing it to dialogue, saying "dialogue and diplomacy are the only option."

Singh is in Seoul to attend the eighth Seoul Defense Dialogue hosted by the South Korean defense ministry as a venue of discussions and meetings among security experts and government officials. He delivered a keynote speech at the opening ceremony on Thursday.

Before leaving Seoul on Saturday, he is scheduled to visit the demilitarized zone (DMZ), becoming the first Indian defense chief to go to the buffer zone.

Expressing gratitude for Seoul's invitation to the security forum, the minister said the bilateral relations "are at an all-time high, literally and figuratively, and we are charting new horizons."