South Korea has so far brought in eight F-35As, beginning with two in late March, under a plan to deploy a total of 40 fifth-generation jets through 2021. But the military has dealt with the introduction in a low-key manner, sparking speculation the government is concerned about objections from North Korea.

"Of diverse options regarding the issue, we are reviewing the F-35As' participation in the ceremony slated for Oct. 1," a government official said.

As the day also marks the 70th anniversary of the foundation of the Air Force and the radar-evading warplanes are its key strategic weapon, showing them off to the public on the day would carry significance, he added.

The envisioned ceremony is likely to take place at the Air Force's 11th Fighter Wing base in the southeastern city of Daegu, another official said. It will be the first time that the ceremony to celebrate the Armed Forces Day is held at an air combat command.

The date of their full operational deployment is not known, as it is classified information.

North Korea has intensified its criticism against South Korea for the introduction of advanced weaponry, including F-35As, claiming that such a military buildup is aimed at destroying North Korea and threatens peace on the Korean Peninsula and in the region. 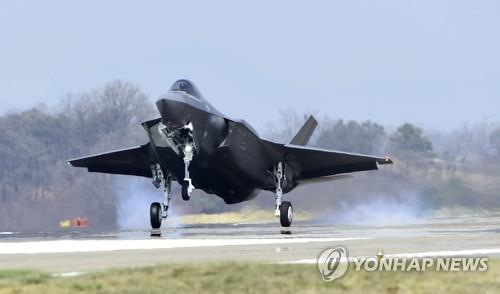