BERLIN, Sept. 8 (Yonhap) -- Samsung Electronics Co. is set to make a quantum leap in sales of its flagship premium lineup QLED televisions this year thanks to growing consumer appetite for high-quality screen products, the firm's TV business head has said.

Han Jong-hee, president of Samsung's visual display business, said the company is expected to solidify its leading market position with a wide range of QLED TVs.

"We have sold over 2 million QLED TVs in the first half of this year, which is more than double from a year ago," Hang said in a meeting with reporters on the sidelines of the IFA technology show in Berlin. "We expect to sell over 5 million QLED TVs this year by expanding our 8K lineup and large-screen TVs."

8K refers to the highest-resolution standard for content creation, which offers four times the number of pixels of a 4K screen and 16 times that of a full HD screen. 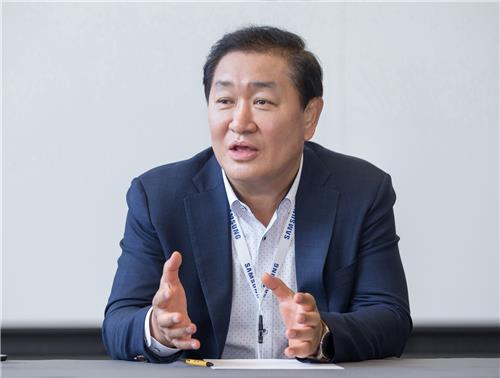 As part of a two-track strategy, Samsung vowed to step up technology development in micro LED TVs to make smaller screens than products currently available, which needs more advanced technology.

Samsung rolled out the massive 219-inch The Wall Professional for the commercial display market in February and added the 146-inch The Wall Luxury last month to target the luxury home cinema market.

Samsung's share in the TV market accounted for 31.5 percent in terms of value in the second quarter, marking the highest in over six years, according to market researcher IHS Markit.

Samsung expects to sell over 5 million QLED TVs in 2019

Samsung expects to sell over 5 million QLED TVs in 2019