He appealed for "public understanding and support" for his decision to appoint Cho despite controversies over alleged ethical lapses and wrongdoing by his family. Cho's wife has even been indicted on charges of forging a university president's citation for her daughter.

Moon said he's aware of the fierce debate over whether Cho is suitable for the post.

"But I thought what's more important is to maintain the principle and consistency," Moon said in a televised statement issued after giving Cho a letter of appointment at Cheong Wa Dae.

It would be a "bad precedent" to not appoint Cho solely on the basis of suspicions of illicit acts that have not been confirmed, Moon said. 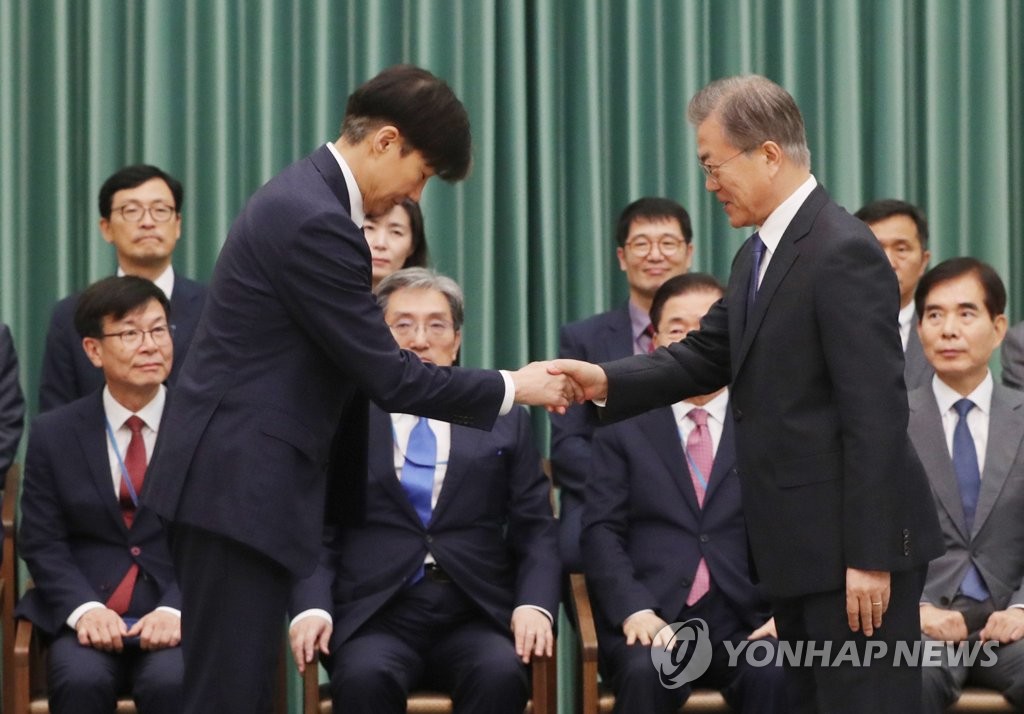 He pointed out that reforming "influential institutions" was one of his "most important" campaign pledges. He was apparently referring to the prosecution, which he views as having excessive power and authority.

Moon said what's needed is to legally and systemically protect the political neutrality of such agencies. He said he's assigning Cho to "complete" the task.

Mindful of criticism that Cho's daughter has been privileged in entering prestigious schools in South Korea, the president pledged "strong reform in the education sector" through a review of the high school education and college entrance system.

Moon also offered a public apology for appointing Cho and five other minister-level officials without confirmation hearing reports from the National Assembly.

He called it a "systemic problem," indirectly criticizing opposition lawmakers who have refused to adopt related documents. 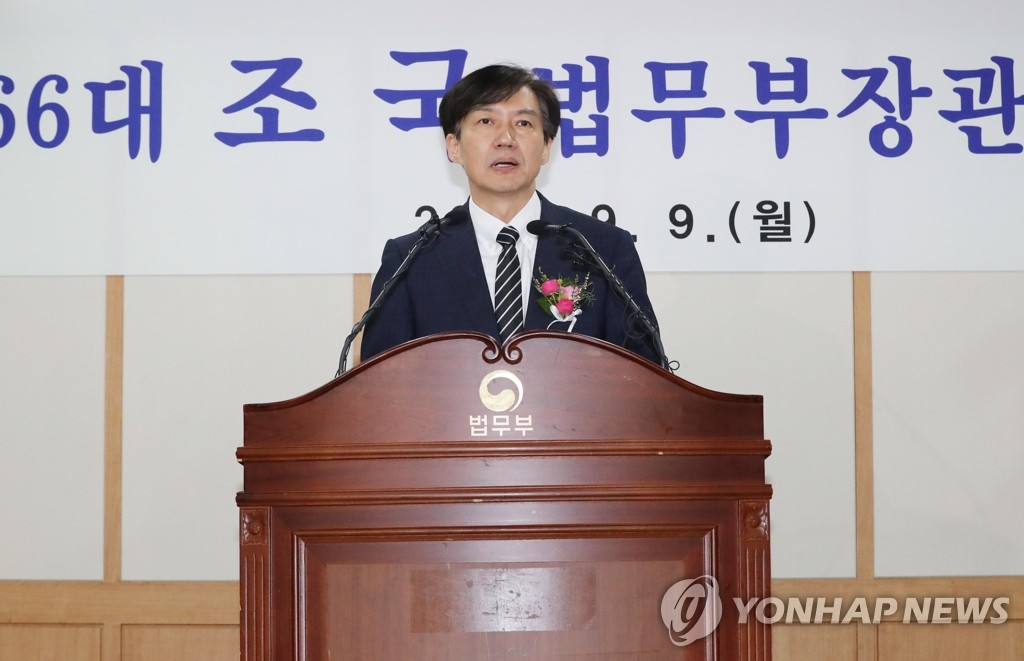 Cho immediately declared that his ministry will play a "substantive" role in overseeing the prosecution.

"In order for the reform of judicial affairs and the prosecution, it's more important than any other thing for the Ministry of Justice to do its own job well," he said during his inauguration ceremony.

While the prosecution has strong power, he added, there's no systemic device to check and control it.

He stressed that the ministry should strengthen its legal function to oversee the prosecution by use of its rights to human resource management and control the prosecution's investigations for the protection of the people's human rights.

The appointment came amid a widening probe by state prosecutors into allegations that Cho and his wife forged documents and used personal connections to help their daughter get admissions at prestigious schools. Also at issue is their suspicious investment in a private equity fund.

Cho, a close aide to Moon, is an architect of the liberal administration's far-reaching prosecution reform scheme. One highlight is to create an independent unit to investigate corruption by high-ranking government officials and grant police more authority.

It's an open secret that the prosecution is strongly opposed to the Moon administration's policy.

The progressive Justice Party said it "respects" the president's decision. Its spokeswoman, Oh Hyun-joo, expressed hope that Moon will succeed in reforming the prosecution, which previous liberal administrations failed to achieve. 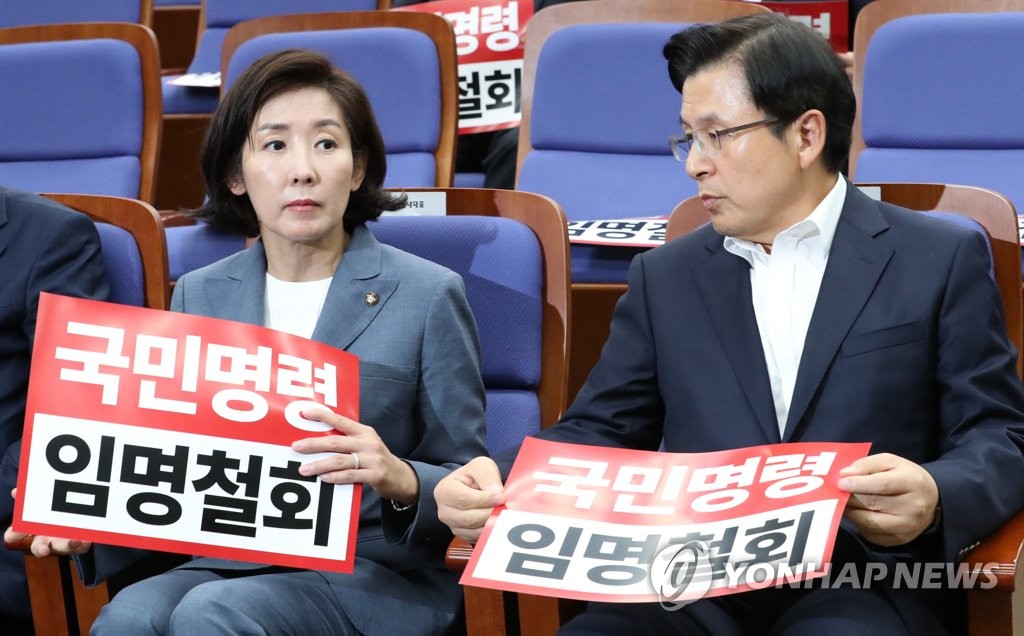 "Today, the rule of law in the Republic of Korea died," Rep. Kim Myung-yeon, spokesman for the Liberty Korea Party (LKP), said. He accused the Moon government of ignoring, and even betraying, the people in an attempt to "control" them.

The president will be judged by history for "abusing and misusing" his right to appoint a minister, Kim said.

The LKP held an emergency meeting of party lawmakers to discuss the matter and decided to mobilize "every possible means" in protest, including a boycott of the regular parliamentary session and a formal proposal to have Cho dismissed.

"Today will be recorded as a historical shame" as he abandoned fairness and conscience, the party's spokeswoman, Kim Jeong-hwa, said.

Later in the day, some 500 students and graduates of Seoul National University, Cho's alma mater and where he has taught law, staged a candlelight vigil for a third time, denouncing Cho's appointment and repeating their call for his resignation.

"Professor Cho has insisted there was no violation of law (regarding allegations) related to him, but the situation has changed. The thesis in which his daughter listed herself as primary author has been taken down from a journal, and his wife has been charged with document forgery," a student representative said.

Meanwhile, Moon also handed certificates of appointment out to five other newly appointed minister-level officials named during the Aug. 9 Cabinet shake-up. They are the science and gender equality ministers, as well as the heads of the Fair Trade Commission, the Financial Services Commission and the Korea Communications Commission.