(ATTN: UPDATES with Trump's remarks, other details)
By Lee Haye-ah

Choe Son-hui made the announcement in a statement carried by the North's official Korean Central News Agency, saying she has taken note of Washington's repeated calls for talks.

"We have willingness to sit with the U.S. side for comprehensive discussions of the issues we have so far taken up at the time and place to be agreed late in September," she said. 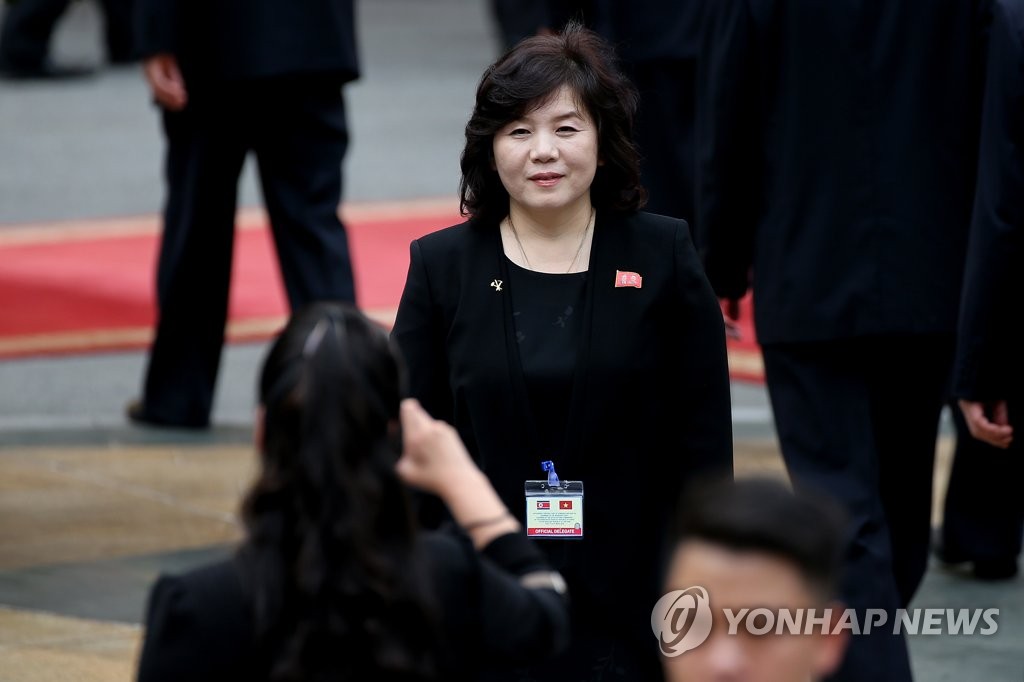 U.S. President Donald Trump later told reporters he had seen the statement but stopped short of giving a definite answer.

"We'll see what happens, but I always say having meetings is a good thing, not a bad thing," he said at the White House.

The offer follows an agreement between Trump and North Korean leader Kim Jong-un at their inter-Korean border meeting on June 30 to resume working-level talks within several weeks.

The two countries have been at an impasse since the leaders' second summit in Vietnam in February ended without a deal due to differences over the scope of North Korea's denuclearization and sanctions relief from the U.S.

Choe said she believes the U.S. has had "enough time" to find a "calculation method" that Kim called for in a speech in April.

"I believe that the U.S. side will come out with a proposal geared to the interests of the DPRK and the U.S. and based on the calculation method acceptable to us," Choe said, referring to North Korea by its official name, the Democratic People's Republic of Korea.

"If the U.S. side fingers again the worn-out scenario which has nothing to do with the new calculation method at the DPRK-U.S. working negotiation to be held with so much effort, the DPRK-U.S. dealings may come to an end," she added.

U.S. officials have consistently urged the North to return to talks despite the regime's testing of short-range ballistic missiles in violation of U.N. Security Council resolutions.

On Sunday, U.S. Secretary of State Mike Pompeo said he thought Trump would be "very disappointed" if Kim does not return to the negotiating table or conducts missile tests that are inconsistent with the previous agreements they reached.

"We don't have any meetings to announce at this time," a State Department spokesperson told Yonhap News Agency in response to the North's offer.

If working-level talks resume, the U.S. side would be led by Special Representative for North Korea Stephen Biegun, who last week urged the North to halt all demonstrations of hostility and return to talks.

His counterpart is expected to be former North Korean Ambassador to Vietnam Kim Myong-gil.

There is also speculation their talks could lead to a high-level meeting between Pompeo and North Korean Foreign Minister Ri Yong-ho on the sidelines of the U.N. General Assembly in New York later this month, although Ri reportedly plans to skip the event.

Last month Ri called Pompeo "the diehard toxin of the U.S. diplomacy" for suggesting that all sanctions on the North would remain in place short of its denuclearization.