The projectiles were launched in an easterly direction from an inland area in the South Pyongan Province, the South's Joint Chiefs of Staff (JCS) said without providing further details, such as the type of the projectiles, flight range and maximum altitude.

"Our military is monitoring the situation in case of additional launches and maintaining a readiness posture," the JCS said in a release.

Tuesday's launches could be designed to strengthen Pyongyang's negotiating hand ahead of the resumption of the nuclear talks that have been stalled since February's no-deal breakdown of a summit between U.S. President Donald Trump and North Korean leader Kim Jong-un.

The firings were the latest in a series of missile or rocket launches that the North has conducted in recent months in protest of joint military exercises between the U.S. and the South. The North last conducted such launches on Aug. 24 and said it tested a "new super-large" multiple rocket launch system.

Last month, the North's leader sent a letter to U.S. President Donald Trump and vowed to stop those military acts when the joint exercise concluded. Seoul and Washington wrapped up their exercise last month, but the North has continued to conduct such launches. 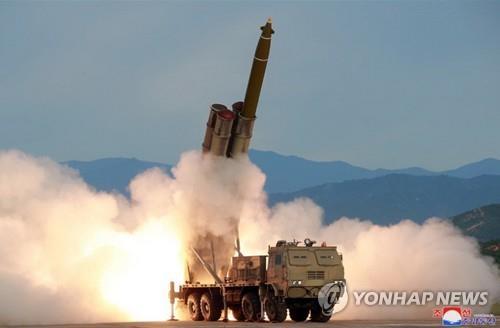