North Korea's Vice Foreign Minister Choe Son-hui said Monday that the regime has the willingness to talk "at the time and place to be agreed in late September," easing doubts about Pyongyang's commitment to talks in the wake of its furious reaction to last month's South Korea-U.S. military exercise.

The North's pivot toward dialogue came after the U.S. talked of security assurances and economic opportunities for a nuclear-free North Korea, while hinting at the possibility of South Korea and Japan seeking nuclear armament that could dwarf the impoverished state's arsenal.

"In addition to its conciliatory gestures that helped forge the dialogue momentum, the U.S. has recently shown a forward-looking attitude vis-a-vis the North's rights to self-defense," said Koh Yoo-hwan, a professor of North Korean studies at Dongguk University.

"While it cannot reject the summit-level agreement for the resumption of talks, the North appears to be seeking fresh dialogue momentum. But concerns still linger over the give-and-take in the upcoming negotiations," he added.

The countries' negotiations could face a uphill battle as Choe called for a "new calculation method" from the U.S., warning that otherwise, dealings between the two countries "may come to an end."

Washington and Pyongyang were expected to re-launch working-level nuclear talks in July as agreed by U.S. President Donald Trump and North Korean leader Kim Jong-un during their impromptu meeting at the inter-Korean border on June 30. 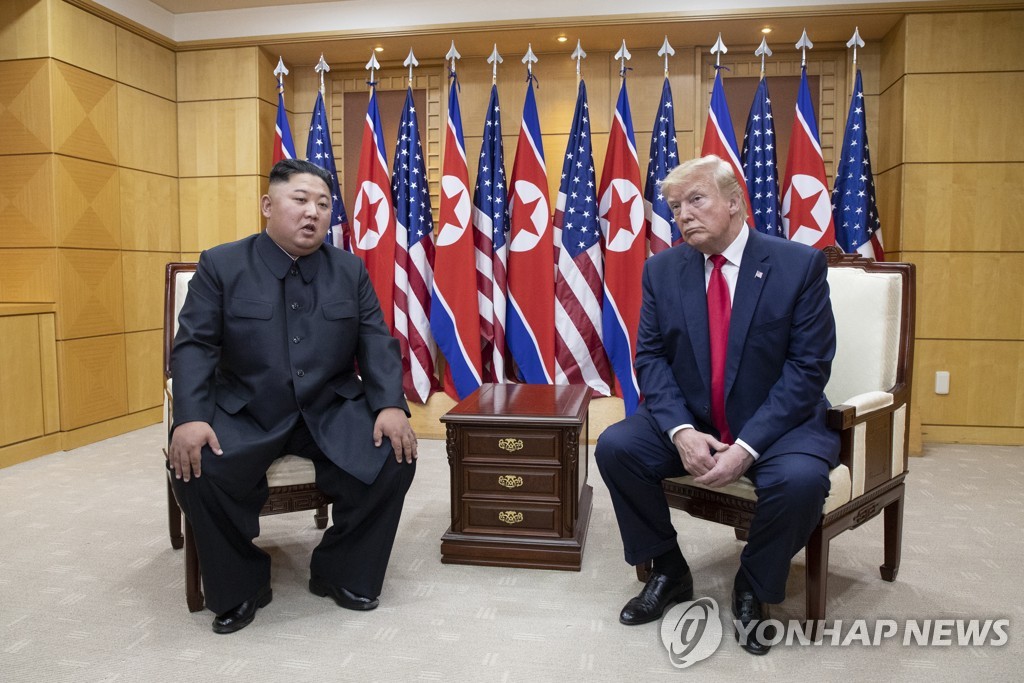 But the North shunned talks with the U.S. and fired off a barrage of short-range projectiles in protest over the allied military exercise, which it decried as a rehearsal for a war of invasion.

Despite growing skepticism over engagement with Pyongyang, Washington maintained its composure, refrained from direct accusations and appealed repeatedly for the communist regime to return to the negotiation table.

But the U.S. messaging toward the North wasn't always conciliatory. It carried tacit warnings that the Trump administration's patience with a recalcitrant Pyongyang could wear thin and that a window of rare diplomatic opportunity for the regime could close.

"I think President Trump would be very disappointed if Chairman Kim doesn't return to the negotiating table or conducts missile tests that are inconsistent with the agreements that they made when the two of them were together these three times," U.S. Secretary of State Mike Pompeo told ABC on Sunday.

The North might have taken such remarks as a worrisome sign, as it has prioritized the personal trust between Trump and Kim in moving forward the Korean peace process, amid fears within Pyongyang that the unorthodox American leader could revert to his earlier "maximum pressure" campaign absent tangible progress in the denuclearization efforts.

"There has been speculation that Trump, in his unique brand of external policy, could make a quick about-face and pivot away from engagement," said Park Won-gon, professor of international politics at Handong Global University.

"This could be a source of concern for the North when Pyongyang wants to maintain the dialogue momentum," he added.

U.S. Special Representative for North Korea Stephen Biegun struck a more jarring note, raising the possibility that nuclear threats from the North could lead Seoul and Tokyo to consider nuclear armament themselves.

When the conventionally better-equipped militaries of its neighboring countries go nuclear, the North would face greater security threats -- a scenario that would make its decadeslong pursuit of nuclear arms futile.

"At what point will voices in South Korea or Japan and elsewhere in Asia begin to ask if they need to be considering their own nuclear capabilities? And what will this mean for a region whose prosperity and growth has been so inextricably tied to long-term stability and peace?" Biegun asked in his speech at the University of Michigan on Friday.

But U.S. diplomats repeatedly held out the prospect of advantages for a disarmed North Korea, including a "bright future" for a country that has long suffered from crippling international sanctions and isolation.

Speaking to a radio station in Kansas on Friday, Pompeo said Washington was willing to arrive at "a set of understandings" with the North that could assure the regime's security if it renounces its nuclear program.

"Every nation has the sovereign right to defend itself," the top U.S. diplomat said. "Then we can create economic opportunity and better lives for the people of North Korea as well."

Any progress in the upcoming nuclear talks will hinge on the amount of flexibility each side shows.

Analysts said that political exigencies both in Washington and Pyongyang might encourage the two countries to be more flexible in the forthcoming negotiations.

Ahead of his re-election campaign, Trump might need a more tangible outcome from his engagement with the North, though bread-and-butter issues may figure prominently when his election preparations enter high gear.

The North Korean leader himself faces a pressing need to make substantive progress in shoring up his country's threadbare economy, particularly when he has made limited headway in his five-year economic development initiative rolled out in 2016.

(News Focus) U.S., N.K. on course for nuke talks despite challenges ahead

(News Focus) U.S., N.K. on course for nuke talks despite challenges ahead