SEOUL, Sept. 10 (Yonhap) -- President Moon Jae-in had a Cabinet meeting Tuesday at a special venue in a show of his administration's resolve to support the domestic production of major industrial materials amid a trade fight with Japan.

Enhancing the competitiveness of the industrial materials, component parts and other technological equipment is a "strategic task for (becoming) an economic powerhouse," Moon said during the meeting held at the Post-Silicon Semiconductor Institute of the Korea Institute of Science and Technology (KIST) in Seoul.

It's a "matter of establishing the foundation of the South Korean economy, beyond the level of South Korea-Japan relations," he added. 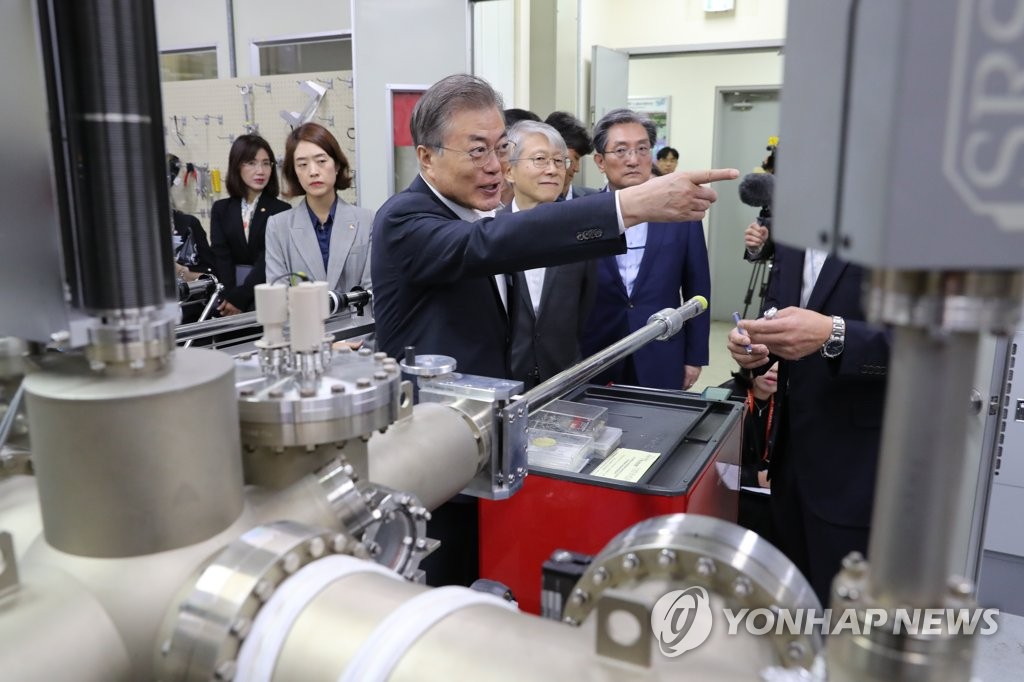 It marked Moon's second weekly Cabinet meeting outside the Cheong Wa Dae presidential compound. In late February, he presided over a session at the Kim Koo Museum in Seoul ahead of the 100th anniversary of the March 1, 1919, Movement against Japan's colonial rule.

He attached a special meaning to the choice of the KIST as the venue, calling it the "cradle" of South Korea technological development.

A blueprint for South Korea's industries, such as shipbuilding, steel and automobiles, which led to the "Miracle on the Han River," was born at the KIST, he said.

Moon said he's presiding over the Cabinet session with his "determination" to make South Korea's economy strong so that nobody can "shake" it.

Moon has stressed the need to innovate the local manufacturing sector.

Japan's export curbs against South Korean firms, which began in early July, served as a wake-up call for conglomerates here, which have relied heavily on supplies from the neighboring country.

Moon presented the nurturing of local suppliers as a mid- to long-term solution.

"The government will aggressively increase investment (in the field)," he said.

The government plans to spend 5 trillion won (US$4.2 billion) for relevant projects over the next three years.

As part of the efforts, the Cabinet approved a plan to create a presidential panel on raising the competitiveness of South Korea's production of industrial materials, component parts and other technology equipment.

Moon said the committee will play a central role in pushing for the policy, which would include the revision of relevant legislation.

Chaired by the minister of economy and finance, it's designed for a "systemic push" for related measures, also involving as many as 50 civilian experts, Cheong Wa Dae said.

"It's expected to play an important role in raising technology competitiveness and reducing external reliance" in the supply of those items, its deputy spokesman, Han Jung-woo, told reporters.

New Justice Minister Cho Kuk was among the participants in the Cabinet session. Moon appointed Cho on Monday despite fierce opposition from critics who take issue with alleged ethical lapses and irregularities involving his family. 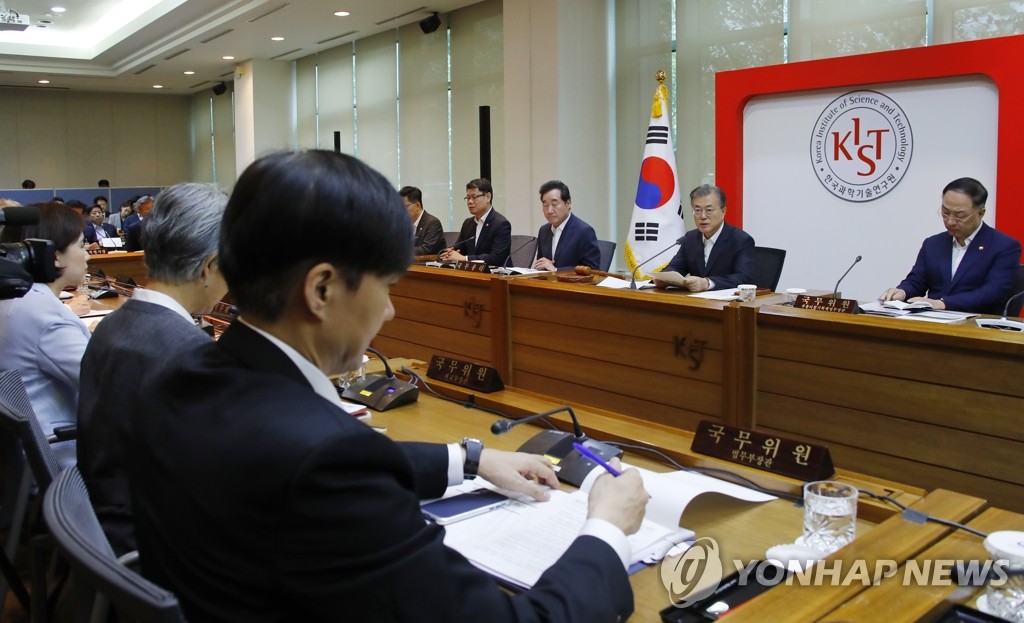 Later in the day, Moon visited a government-civilian service center, set up at the Seoul headquarters of the Korea Chamber of Commerce and Industry (KCCI) on July 22, to help South Korean businesses deal with troubles in obtaining necessary materials and parts due to Tokyo's export restrictions. The president received a briefing on related situations.