SEOUL, Sept. 10 (Yonhap) -- South Korea on Tuesday called on Japan to actively join multilateral talks to enhance the safety of flights near the country's southern resort island of Jeju.

Currently, there is an air corridor that stretches over three offshore points -- Akara in China, South Korea's flight information region (FIR) near Jeju and Japan's Fukue Island. In the corridor, which is 519 kilometers long and 93 km wide, airlines use eight altitudes to serve flights to each other's destinations to avoid collisions.

But the three nations are exercising their own air traffic control over the route, and Seoul has been proposing talks among the three to reduce any potential collision and create a new air route.

The South Korean government has strongly demanded Japan participate in the multiparty consultations expected to be held at the 40th International Civil Aviation Organization (ICAO) Council in Canada later this month, an official at the Ministry of Land, Infrastructure and Transport said over the phone.

"On top of the existing corridor, we have asked the ICAO, Japan and China to continue to have talks to create a new route that runs above Jeju Island in order to disperse air traffic in the region and sharply minimize the risk of air collisions," the official said.

In October last year, ICAO, Japan and China agreed to form a consultation group. ICAO and China have since been in talks to generate the new route, but Japan hasn't participated in the consultations, the ministry said.

"As the new route is located within the Korean FIR, the Seoul government has argued that it will take air traffic control in the route, if generated. Japan stood against creating a new route in the region, arguing a new route can be added in the existing corridor," the official explained. 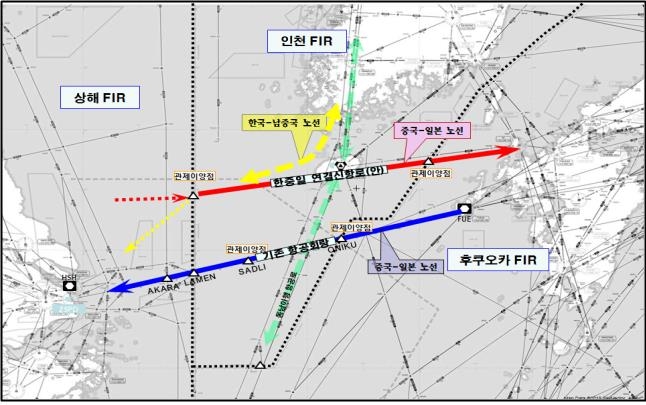