SEOUL, Sept. 10 (Yonhap) -- The head of state-run Korea Development Bank (KDB) on Tuesday dismissed concerns about the planned sale of a stake in Asiana Airlines, expressing hopes that the debt-ridden carrier could return to normal business after successful restructuring efforts.

KDB Gov. Lee Dong-gull made the remarks at a meeting with reporters, a week after Kumho Asiana Group, the airline's parent, received preliminary bids from four potential buyers, including Aekyung and local activist fund Korea Corporate Governance Improvement (KCGI), for a 31-percent stake in Asiana. KDB is a main creditor bank of Kumho Asiana.

There have been market concerns that the stake sale may not go as planned, given the airline's heavy debt load.

Major business conglomerates, such as SK, CJ, and Hanwha, had been widely mentioned as potential buyers for Asiana, but they did not participate in the initial bidding.

Asked about the market concerns, Lee replied that efforts to overhaul Asiana should be based on the airline's prospects for mid- and long-term future growth potential.

"I hope that Asiana Airlines could become a better and stronger company as the best bidder takes over the management of Asiana," Lee said. 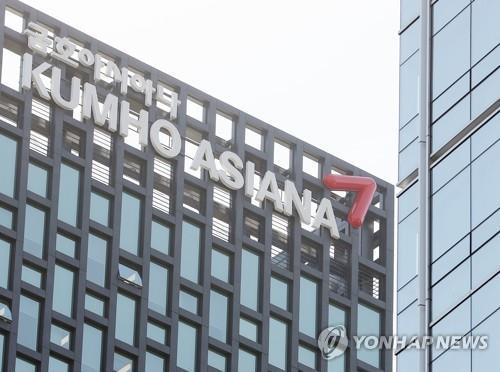 KCGI and the private equity fund have not disclosed their partners.

Lee noted that the two funds are not allowed to buy the stake in Asiana unless they disclose their partners.

Kumho Asiana, which is expected to shortlist the bidders this month before due diligence, plans to complete the stake sale of the airline unit by the end of this year.

In 2018, Asiana Airlines and KDB signed a deal that required the carrier to secure liquidity through sales of assets and other means.

In the January-June period, the airline's net losses widened to 292 billion won (US$245 million) from 43 billion won a year earlier due to the won's weakness against the dollar. A weak won drives up not only the value of dollar-denominated debts when converted into the local currency but also fuel purchasing costs.

It owes financial institutions a total of 2.7 trillion won in short-term obligations, with 660 billion won of loans maturing this year.