ASHGABAT, Turkmenistan, Sept. 10 (Yonhap) -- A spirited first half was followed by a tepid second half for South Korea in their World Cup qualifier on Tuesday, and a 2-0 win over Turkmenistan still left the Taeguk Warriors searching for much-needed consistency.

Midfielders Na Sang-ho and Jung Woo-young scored a goal apiece in each half to lift South Korea over the hosts in Ashgabat. It was South Korea's first match in Group H in the second round of the Asian qualification for the 2022 FIFA World Cup, and the bid to qualify for the 10th consecutive World Cup got off to a winning start at least.

But the final result is liable to mask some of the team's lingering problems, namely its inability to finish around the net. 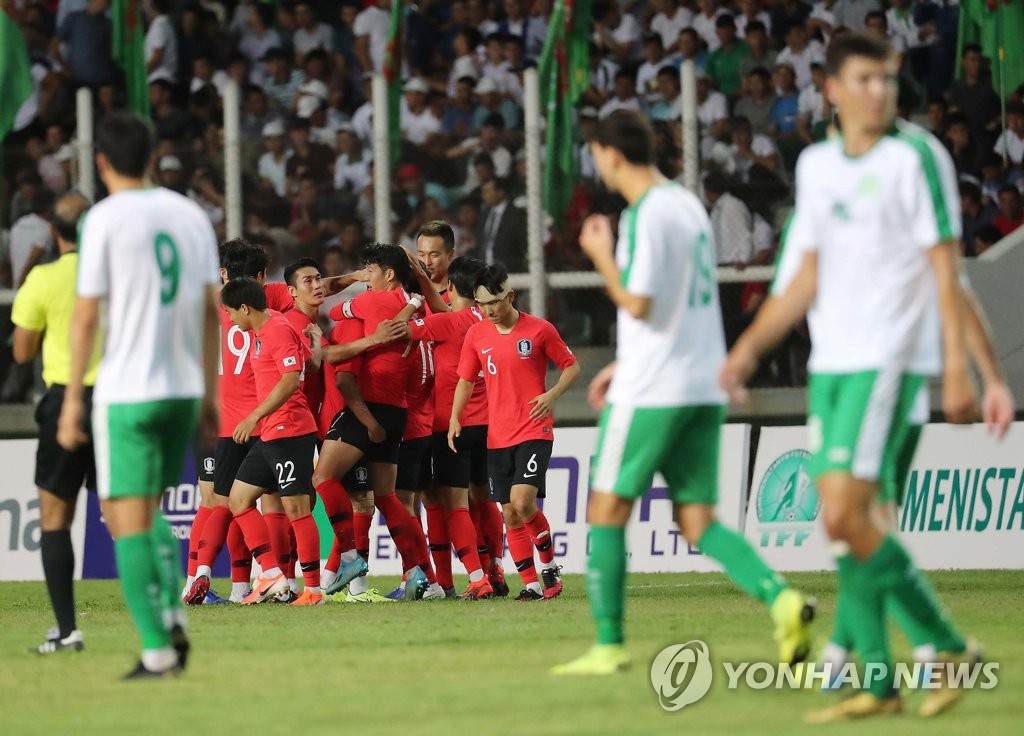 South Korea didn't mess around from the kickoff, with forward Hwang Ui-jo threatening to score twice inside the opening dozen minutes. Then Na put the team on the board in the 13th minute when a cross went off an opposing defender and landed right at Na's feet for an open chance.

But for the next 70 minutes of football, South Korea couldn't solve the crowded defense. Jung came through with a free kick goal worthy of a highlight reel in the 82nd minute, after which South Korea showed some life and pushed for a third goal that didn't come.

At this stage of World Cup qualifying, South Korea often go up against far inferior opponents -- teams well outside the top 100 in FIFA rankings -- who tend to sit back on defense and try to outnumber South Korean attackers. Those teams are more than happy to put nine players in the box and try to pounce on counterattack opportunities should the ball bounce their way.

The key for South Korea in those situations is to somehow find holes through those human walls. For the opening 30 minutes or so on Tuesday, South Korea mostly had their way around the Turkmenistan defense, thanks to some deft passing and off-ball movements, and it seemed only a matter of time before they could put up some crooked number on the board.

Instead, the first half ended without another goal. And Turkmenistan started asserting themselves on the attack in the second half and generated some dangerous chances. South Korea dodged some bullets as the opposing forwards misfired on counterattacks. 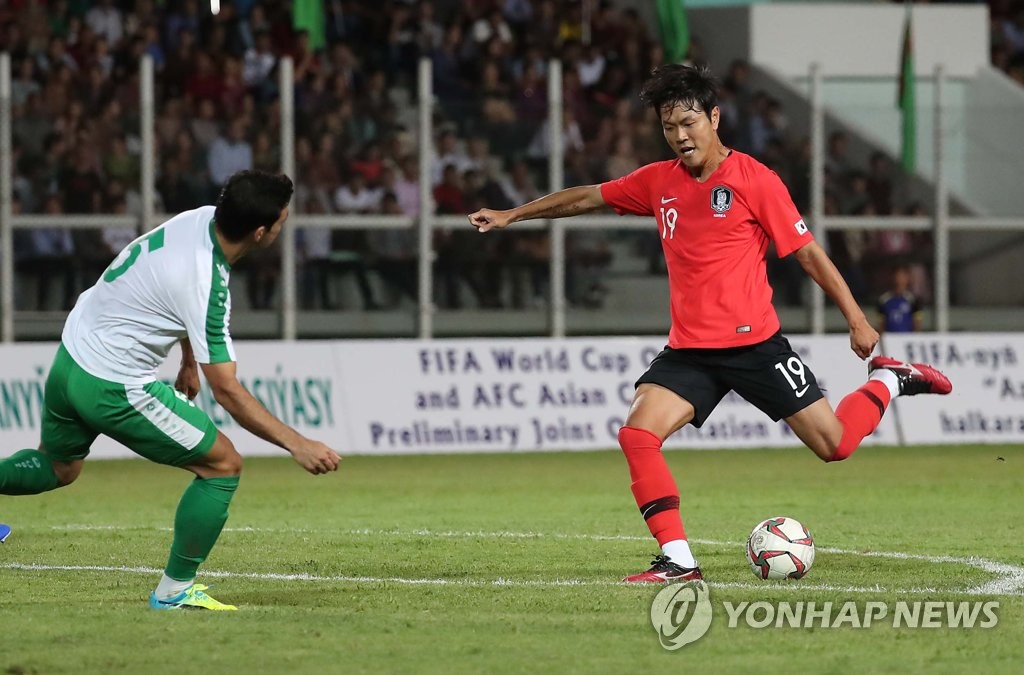 After his disastrous experiment with a back-three setup against Georgia in last week's friendly, South Korea coach Paulo Bento went back to his trusted back-four formation, while juggling his midfielders and forwards throughout the match.

The defense corps looked more in sync than against Georgia, though it's all relative because Turkmenistan presented far less of a danger to South Korea than Georgia.

The attackers went from borderline dominant in the first half to maddeningly ineffective in the second half. The Turkmenistan defense didn't improve suddenly during the first-half break; rather, South Korea didn't appear to be playing with as much urgency in the final 45 minutes.

Forward Kim Shin-wook, South Korea's tallest player at 196 centimeters, could have been the spark the team needed in the second half. He was called up for the first time since last year's FIFA World Cup in Russia, and much was expected of the in-form striker who came into the World Cup qualifier having scored eight goals in his first six matches for his new Chinese club, Shanghai Greenland Shenhua.

Kim, who was benched against Georgia, only got off the bench in the 82nd minute on Tuesday. Jung scored his free kick goal only seconds after Kim entered the match, and last-gasp attempts to set up Kim for a header all went awry.

It seemed as though two different South Koreas played in each half on Tuesday, and it will send Bento and his team back to the drawing board for answers. 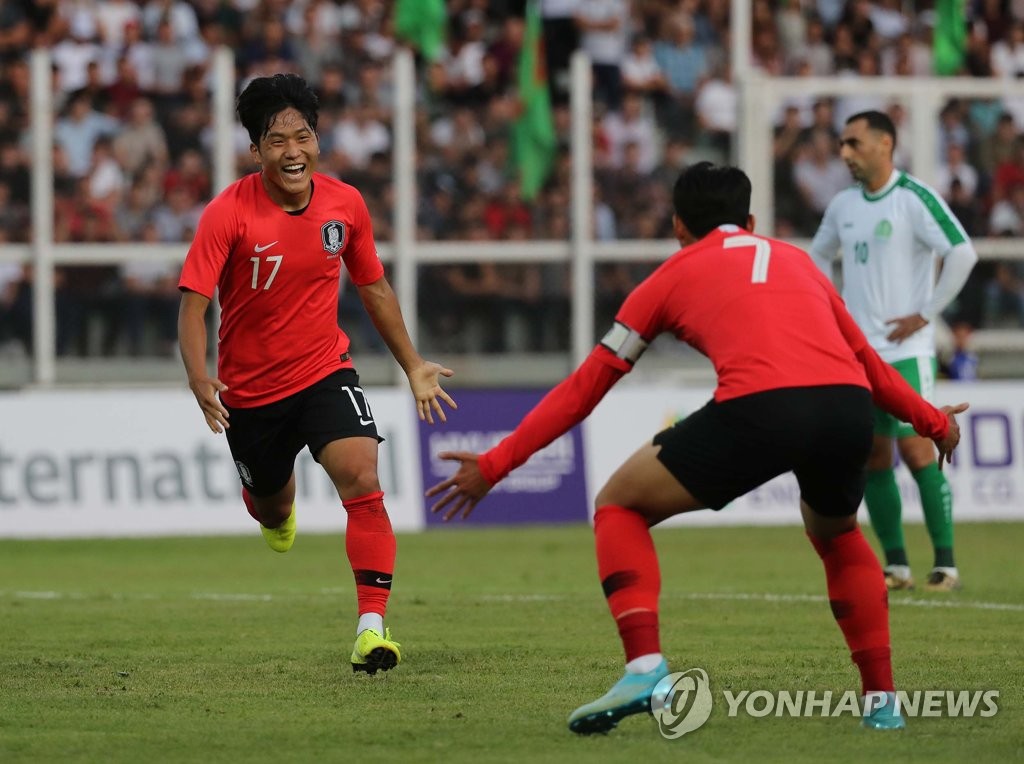