Coway, South Korea's No. 1 water filter supplier with an air purifier and toilet bidet lineup, has launched its air purifiers in the United States and some Southeast Asian and European nations, including Sweden, Germany and Italy. 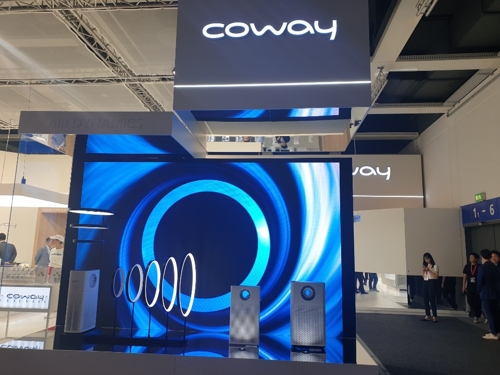 "We are here to tap into the growth potential in Europe's air purifier market," Lee Ji-hoon, the head of Coway's global market sales division, said during an interview with Yonhap News on the sidelines of IFA. "We are looking to build a brand image in Europe, as well as the Middle East."

To make a successful foray into the new burgeoning market, Lee said the company will adopt a localized marketing strategy, such as using different filters and advertising messages.

"Unlike Asia classified as a pollution market, Europe has both pollution and allergy markets," Lee said.

As Western Europe is categorized as an "allergy" market with a high ratio of allergy and asthma patients, the company plans to use filters that are more efficient in capturing allergens like pollen and dust mites, and highlight the benefits of having indoor air purifiers for health.

In Eastern Europe, one of the fast-growing "pollution" markets due to coal power plants and construction activities under way by many countries, the company will use specialized filters effective for capturing fine dust particles, gas and other pollutants, Lee said.

"Poland is a representative pollution market with industrialization, having seen a rapid growth in the air purifier market over the past few years," Lee said. "Polish people used to wear masks when air quality is bad, but a growing number of people have started using air purifiers. It will provide a good sales momentum for us."

While the firm has a vibrant rental business for its water and air purifiers in South Korea and Malaysia, Coway plans to only sell its products via local retail channels and online shopping malls in Europe, considering the different business environment. 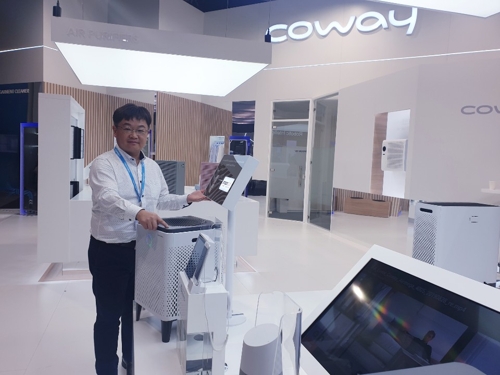 "The rental market business model is unavailable in Europe, and it is not economically feasible due to high labor costs," Lee said. "In Europe and the United States, we only sell products without offering the rental care service."

In the U.S., Coway launched a smart air purifier compatible with Amazon's voice assistant Alexa, which is the world's first Internet-of-Things model in the segment. The system also syncs with Amazon's Dash Replenishment Service, which alerts users when the filter needs changing.

Despite its relatively new image compared with Korean home appliances giants Samsung and LG with strong brand power, Coway said it will actively promote its specialty in the sophisticated filter system and smart solutions to reach out to global customers.

Lee said the firm will focus on targeting the mid- and high-range segment in the global market to differentiate its product from cheap Chinese brands.

"Although Coway's air purifiers are priced higher than cheap Chinese products, we have gradually expanded the market share in major markets via word-of-mouth and good ratings in social networking sites," Lee said. "It usually takes time, but our strategy focusing on quality products has proven to be effective."

In light of showcasing its products at the major consumer electronics show, Lee said the company will bolster marketing efforts to seize ample business opportunities in the promising air purifier market.

The global air purifier market is expected to reach approximately US$6.18 billion by 2023, expanding at a compound annual growth rate of 5.2 percent during the period, according to market tracker Research And Markets.

"Europe's air purifier market has been growing, and it is important to enter the market before it's fully developed," Lee said. "If you try to start a new business after the market is fully ripe, it's already too late."