BERLIN, Sept. 12 (Yonhap) -- Cubroid, a South Korean robotics startup, is exploring ways to capitalize on the rising popularity of coding education with its easy-to-assemble modular robots, its CEO has said.

Founded in 2017, Cubroid has developed a modular robotics and STEAM (science, technology, engineering, arts and math) education platform for kids, selling products in more than 26 countries in Europe, Asia and Latin America.

Mark Shin, CEO and founder of the startup, said the company's goal is to offer an easy and fun method for coding so they can be prepared, even lead, the next wave of digital technologies.

"An increasing number of elementary schools in many nations are adopting coding classes, and we want to make kids learn coding with an easy and fun way," Shin said during an interview with Yonhap News on the sidelines of IFA technology show held from Sept. 6-11 in Berlin. 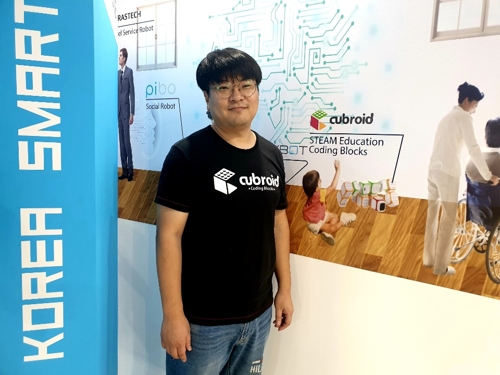 Cubroid is an interactive modular robotics set that provides a hands-on introduction to basic programming. The modular cubes are comprised of seven sensors that can be programmed wirelessly and connected to other building blocks that have different functions.

Cubroid is also compatible with Lego blocks allowing even further creative expression on the part of younger learners. Physically assembling the blocks is very similar to playing with Legos.

"We designed the program to make children aged between 6 and 8 able to easily assemble what they have in mind. It is simple and easily accessible," Shin said. "Cubroid's design makes it easier to introduce to kids than other similar products that require wired connections."

While preschoolers who haven't learned to read can also build small robots, more experienced users can use a program to build code for the blocks.

As a father of three daughters, Shin started the educational robot project to teach coding to his kids, who turned out to be great helpers for his company.

"I developed over 100 apps for the early childhood education, but software had its own limit," the 40-year-old said. "So I decided to integrate it with hardware."

His second-grade daughter loves Legos and 20-30 percent of the designs were from her ideas. Shin also tested the coding program for his third daughter in kindergarten, who seems to have techie genes in her, the CEO said. 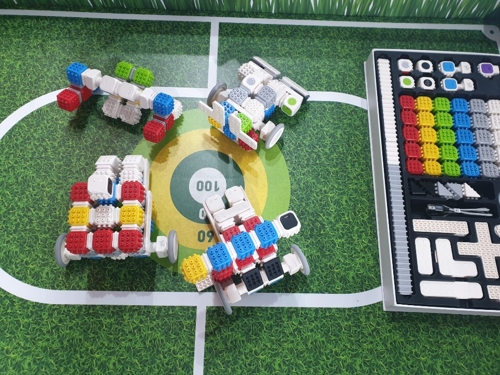 Users can separate the AI block and place it on a desk while one works or connects all the parts, and have Artibo follow the user from one room to the next, the firm said.

"The AI robot can recognize faces and voices, and it supports over 14 languages," Shin said. "If a kid registers (his or her) father's face in the AI robot and programs an algorithm, Arbito can play music when the father comes back home."

With more diversified models and price ranges, Shin said the company aims to tap deeper into the educational robot and AI education market next year.

"Without a strong brand image abroad, we have mainly focused on the business-to-business market, including schools, private institutions and academies," he said. "To better target the consumer market, we have made cheaper packages to sell online and are promoting them."

The global educational robots market was valued at $784.9 million in 2018 and projected to reach $2.54 billion by 2026, according to the research agency Verified Market Research.