SEOUL, Sept. 11 (Yonhap) -- Some 1,000 cases of workplace bullying were reported in the month after an anti-bullying law went into effect in mid-July, a civic group focusing on the issue said Wednesday.

According to Workplace Gapjil 119, 1,073 cases were reported to it by bullied workers between July 16, when the act was implemented, and Aug. 14. "Gabjil" refers to abuses committed by people in positions of authority against those less senior.

The figure was a huge increase from previous ones and 2.8 times higher than the 379 cases that were reported to the labor ministry in the same period, the organization said.

By type, unfair instructions were top with 231 instances, followed by bullying or discrimination with 217, assaults or verbal abuse with 189, insults or defamation with 137 and coercion with 75, it said.

"The anti-bullying law is instrumental to protecting workers from various types of bullying that had been paid less attention in the past," the organization said. 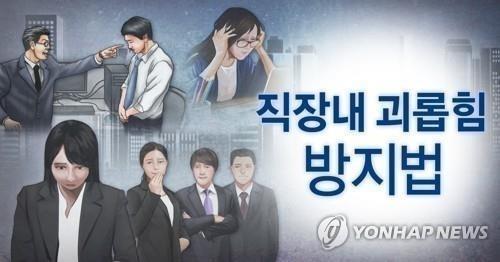 The anti-bullying law defines workplace harassment as an act of causing physical or mental suffering or a worsening of the work environment by employers or workers using their status or power to behave beyond the scope of working norms.

If workplace harassment is reported, employers should launch an immediate probe and take proper action. Employers could face a maximum three-year jail term and a fine of up to 30 million won (US$24,750) should retaliatory or discriminatory measures be taken against victims or those who report abusive acts.
(END)