ANSAN, South Korea, Sept. 12 (Yonhap) -- Cambodian residents in Ansan, a Gyeonggi Province city known for its large foreign population, are planning to organize a cultural festival this weekend in time for Chuseok, one of the biggest traditional holidays in Korea, officials said Thursday.

According to municipal officials, Cambodian television network Bayon TV will hold the "Cambodian Culture Festival" on Saturday at the Ansan Culture Plaza in the center of the city, about 40 kilometers south of Seoul.

About 5,000 foreign residents, including about 650 Cambodians living in Ansan, are expected to participate in the Cambodian festival to enjoy the Chuseok holiday together, the officials said, adding the Cambodian ambassador to South Korea and a vice minister from Cambodia's Ministry of Posts and Telecommunications will also be on hand.

Events of the Cambodian festival scheduled to begin at noon Saturday will include a sampling of various global foods, a demonstration of traditional Cambodian games and a concert by renowned Cambodian singers.

Chuseok, the Korean equivalent of Thanksgiving, is celebrated on Aug. 15 of the lunar calendar, which falls on Friday this year, with the holiday running from Thursday to Sunday. 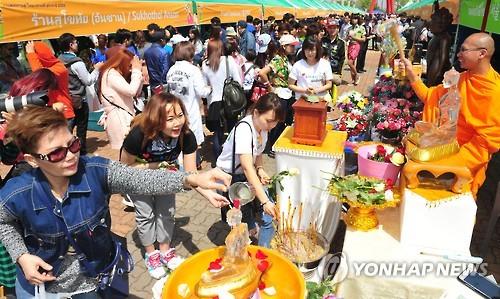 Due to its unique multiculturalism, various foreign cultural festivals continue to take place in Ansan throughout the year.

In early June, a traditional Thai water festival, called Songkran, was held in Ansan, with the participation of Thai workers.

On Sept. 27, Indonesians living in Ansan plan to hold the Kenduri folk festival.

Korean-Chinese residents in Ansan are also considering holding their own festival, named the "Korean Hanmaeum (One Mind) Festival," in Ansan this fall.

Bangladeshi nationals living in Ansan had until several years ago hosted a traditional Bangladeshi festival.

"As many foreign residents from around the world live in Ansan, various foreign cultural festivals and events are held in the city throughout the year to help them relieve their homesickness," a municipal government official said. "The municipality of Ansan has been supporting such festivals in various ways."

'Cambodian Culture Festival' to take place in Ansan during Chuseok

'Cambodian Culture Festival' to take place in Ansan during Chuseok