SEOUL, Sept. 11 (Yonhap) -- The main opposition party intensified its political offensive against President Moon Jae-in on Wednesday, the eve of the four-day Chuseok holiday, for appointing his embattled aide as justice minister despite strong opposition from lawmakers.

Politics will apparently be among the major topics of conversation when people get together in their hometowns for the autumn harvest celebration.

"(We) will stop the tyranny of the Moon Jae-in administration through every battle," Hwang Kyo-ahn, head of the conservative party, said in a statement during a rally in Incheon, just west of Seoul. 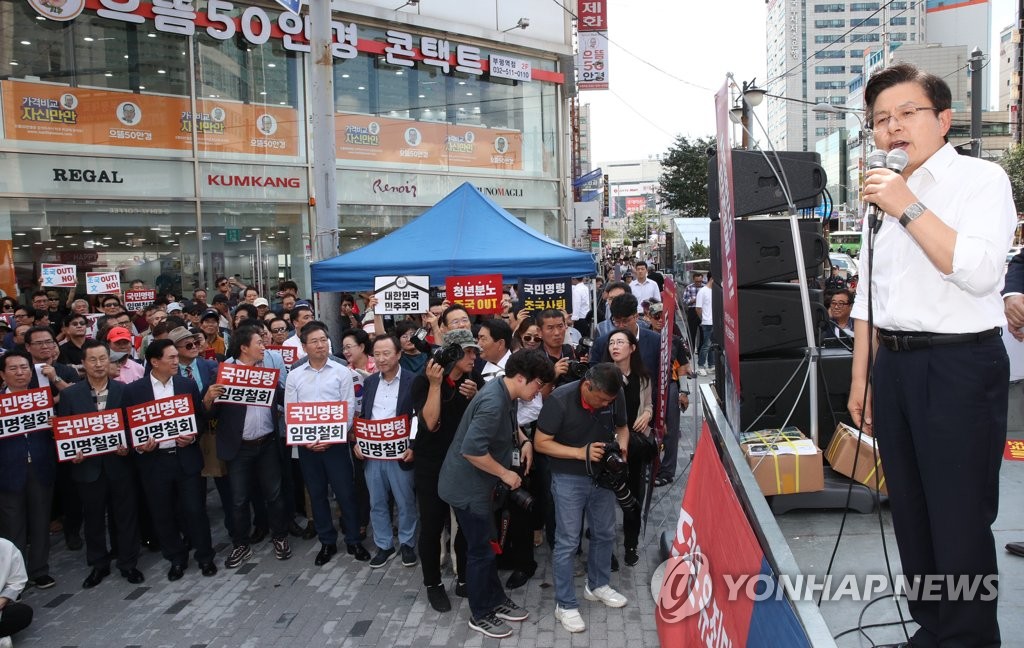 He appealed to the public to help the party's fight against the Moon government, saying it has "trampled on" the people's fury and resistance and "eventually crossed the bridge of no return."

Since Moon named Cho to lead the Ministry of Justice on Aug. 9, the LKP and other critics have ferociously opposed his choice. They accused Cho of having failed to thoroughly screen nominees for key government posts while serving as senior Cheong Wa Dae secretary for civil affairs over the last two years.

In recent weeks, Cho and his wife, a professor, have faced harsh public criticism that they unfairly used their social status and personal connections to help their daughter get admitted into prestigious schools. Suspicions are also rampant over an investment in a private equity fund and Cho's family is now confronted with a widening state prosecutors' probe.

Despite all this, Moon appointed Cho anyway, saying it's more important to reform the prosecution and that he's the right person to carry out that mission.

Moon's decision proves that his campaign pledge to promote fairness, equality and righteousness was nothing more than a "sweet lie," according to the LKP chief. He demanded Moon withdraw Cho's appointment.

Hwang is scheduled to attend a series of protest rallies in front of several railway stations in Gyeonggi Province and stage a separate sit-in on Gwanghwamun Square in Seoul together with Rep. Na Kyung-won, the party's floor leader, throughout Thursday. 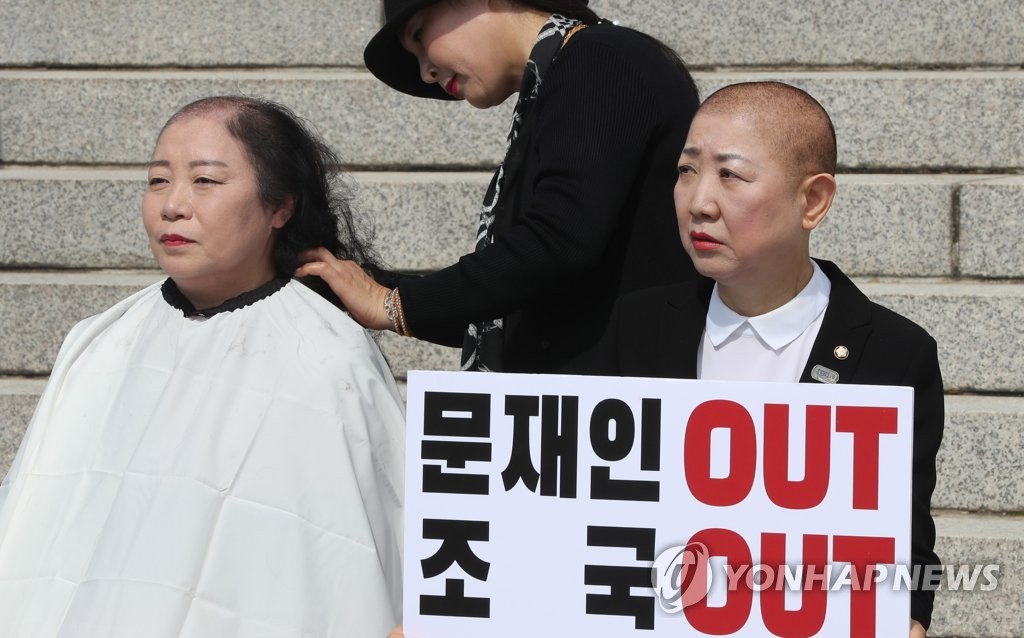 Rep. Chung Woo-taik, another senior LKP member, stressed that the party should "stand up against the leftist forces" and kick off a national campaign to oust the Moon administration, not just the justice minister.

In tandem with street protests, the LKP is expected to push for such parliamentary measures as lawmakers' own inspection of allegations involving Cho's family and a no-confidence vote against the new justice minister.

It's uncertain whether the party, which has only 114 seats in the 300-member National Assembly, will be able to get those measures through.

The center-right Bareunmirae Party (BMP) is supporting the LKP, but other opposition parties appear to be taking a lukewarm stance.

The ruling Democratic Party (DP) pressed the two parties to halt their political attacks over the issue and join in efforts to foster economic growth.

"The Democratic Party will endeavor more to care about the people's living, including revitalizing the economy and creating good-quality jobs," Rep. Lee Hae-chan, the party's leader, said during a meeting with other senior DP officials at Seoul Station.

Rep. Sul Hoon of the party said, "Hwang, leader of the LKP, said the Minster Cho issue is the most urgent task. But the most important pending issue is the people's living."