SEOUL, Sept. 16 (Yonhap) -- A dozen Korean traditional artworks from the Joseon-era traveled from around the world back home for restoration and exhibition, a heritage agency said Monday.

An exhibition under way at the National Palace Museum in the front yard of Gyeongbok Palace in central Seoul brings together 12 rare ink paintings and embroidery works brought home from six museums in four foreign countries, including the Cleveland Museum of Art and the Victoria and Albert Museum.

Among the most notable items on display at the exhibition, entitled "Restoring the Legacy of Korean Paintings," are "Dwelling by a Mountain Stream." It is a rare landscape painting by a royal court painter in the early era of Korea's last kingdom, Joseon (1392-1910), now owned by the Cleveland Museum of Art.

Another work from the same museum, "Portrait of a Scholar Official," joined the exhibition, having been reframed at a local art restoration center to reclaim its original presentation format.

Also on display is a gold orchid painting on a sheet of black silk by Yi Ha-eung, the regent of Joseon during the minority of King Gojong in the 1860s.

Restoration specialists found hidden letters that accompany the painting as the work, owned by Sweden's Museum of Far Eastern Antiquities, was reframed here, according to the Cultural Heritage Administration. 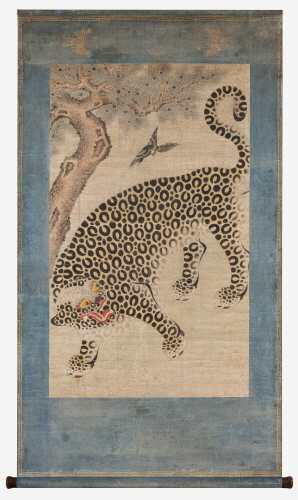 Another painting work from the Swedish museum, "Leopard and Magpie," has been restored and put on display here before being returned to Sweden.

The exhibition includes two embroidered folding screens from the Victoria and Albert Museum in Britain and the Museum at the Rothenbaum in German, both featuring flower patterns.

On the sidelines of the exhibition, the heritage administration plans to host a symposium on Sept. 26 at the museum to have in-depth discussions on the recent restoration process.

"The administration will continue efforts under the preservation and recovery project to help more stably preserve overseas-based Korean heritage assets and to have more opportunities to present them to a wider audience," the administration said.

The exhibition runs till Oct. 13 before the restored arts works are returned to their owners.