The new platform, dubbed "Wavve," will go online on Wednesday, with an aim of accruing 5 million paid subscribers and annual sales of 500 billion won (US$422 million) by 2023, according to Content Wavve Corp.

Content Wavve said it will invest 300 billion won by 2023 to produce original content -- a first for a local OTT service provider.

"Wavve will have a competitive edge by investing in original content and taking on global businesses," CEO Lee Tae-hyun told reporters.

Wavve will offer three streaming plans -- Basic, Standard, and Premium -- costing 7,900 won to 13,900 won per month, the company said. The Standard and Premium plans will allow users to watch on two screens at a time.

The new platform comes on the heels of rising challenges from global media giants like YouTube and Netflix, which have rapidly expanded their clout in the local online streaming market.

Netflix, which currently has nearly 150 million paid subscribers globally, has recently produced more original programs in languages other than English as part of efforts to target audiences around the world.

"Kingdom," Netflix's first original Korean drama, was released in January and has been credited with bringing in more local subscribers.

Netflix is estimated to have had 1.86 million paid active streaming subscribers in South Korea in July, compared with 420,000 users during the same period a year earlier, according to data by Nielsen Korea.

SK Telecom will become the largest shareholder, with a 30 percent stake, while each of the broadcasters will have 23.3 percent stakes, according to the carrier. 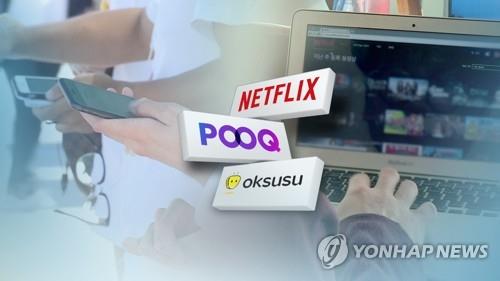