Earlier in the day, the local daily JoongAng Ilbo reported that the invitation was extended in an undisclosed personal letter that Kim sent to Trump around Aug. 15, and the letter was separate from another letter that Trump disclosed on Aug. 9 as having received from Kim.

During a parliamentary session on Monday, Kang told lawmakers that she "heard detailed explanations from the U.S. side that there was such a letter a while ago" but was "not in a position to confirm what's in the letter or when it was delivered." 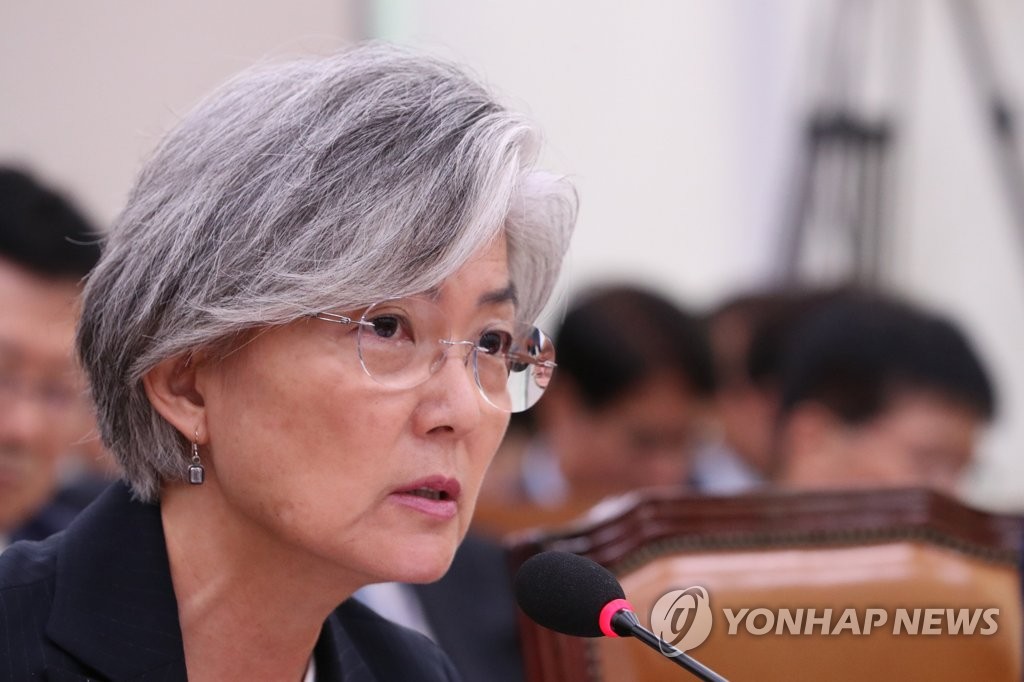 The remark appeared to confirm the news report about the undisclosed letter. But Kang's ministry later clarified that she was referring to the letter that Trump already disclosed and that nothing has been confirmed about the other letter.

"What Foreign Minister Kang mentioned at the parliamentary session is about a letter that President Trump disclosed on Twitter on Aug. 10 (Korean time)," a foreign ministry official said on condition of anonymity.

"Nothing has been confirmed about the latter about Chairman Kim having invited President Trump to Pyongyang, which a media outlet reported today," the official added.

Asked if there is any possibility that Trump and Kim will meet before the resumption of working-level nuclear talks between their countries, Kang called it "too excessive an expectation."

"There wasn't an agreement reached between the leaders of the North and the United States in their second Hanoi talks even though there were working-level negotiations beforehand," Kang said.

"I think that for the success of the summit, working-level officials should meet and hold discussions first over the (potential) outcomes of the (next) summit," she added.

Pyongyang has recently offered to return to dialogue with Washington late this month after a period of tensions caused by its angry reactions to last month's combined military exercise between the South and the U.S.

But it called for the U.S. to come up with a "new calculation method" acceptable to the regime, heralding another uphill battle in the next round of negotiations.

To a question about the possibility of the North Korean leader attending the U.N. General Assembly in New York later this month, Kang said that there have been no signs detected of the North preparing for his attendance at the gathering, though such a possibility can't be completely ruled out.

During the parliamentary session, Kang was pelted with sensitive questions, such as one about rumors that she and Deputy National Security Advisor Kim Hyung-chong are on bad terms.

"I would not deny that," Kang said when asked about rumors that she and Kim had an altercation when they were accompanying President Moon Jae-in during his trip to Central Asia in April.