WASHINGTON, Sept. 16 (Yonhap) -- U.S. President Donald Trump, in an apparent rebuke to North Korean leader Kim Jong-un, said Monday it is not the right time to accept an invitation to Pyongyang, although a visit could happen in the future.

Trump said last week that he expected to meet Kim again "at some point" this year.

On Monday, a South Korean newspaper reported that Kim had invited Trump to Pyongyang in a letter sent in August. 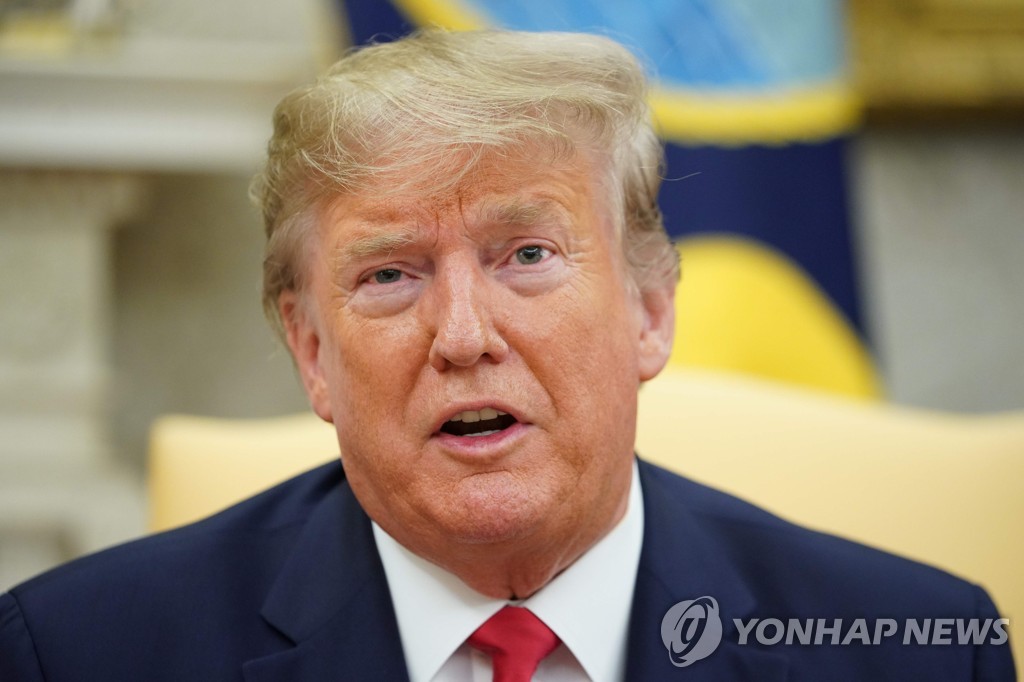 "I don't want to comment on that," Trump told reporters at the White House when asked if he was invited.

Asked if he would be willing to go to North Korea, he said, "Probably not. I don't think it's ready. I don't think we're ready for that. I would do it some time, at some time at a later future."

Trump and Kim have had three meetings to negotiate the dismantlement of North Korea's nuclear weapons program in exchange for U.S. economic and political concessions.

"Depending on what happens, I'm sure he'll love coming to the United States also, but no, I don't think it's ready for that," Trump said of Kim. "I think we have a ways to go yet."

The first summit took place in Singapore in June 2018 and the second in Vietnam in February, which ended without a deal. A third impromptu meeting inside the Demilitarized Zone on the inter-Korean border on June 30 produced an agreement to resume working-level negotiations that have not happened.

The two sides have been apart on how far the North should denuclearize in order to receive sanctions relief and security guarantees from the U.S.

On Monday, the director-general for American affairs at North Korea's foreign ministry called on the U.S. to remove all "threats and hurdles" before they sit down to discuss the regime's denuclearization.

"We welcome the North Korean commitment to resume negotiations in late September," a U.S. State Department spokesperson told Yonhap News Agency, saying there are currently no meetings to announce.

"We are prepared to have those discussions at a time and place to be agreed," added the spokesperson.

(2nd LD) Trump says it isn't time for him to visit N. Korea

(2nd LD) Trump says it isn't time for him to visit N. Korea