SEOUL, Sept. 17 (Yonhap) -- South Korea plans to spend more than 1 trillion won (US$841 million) in funds and corporate guarantees as part of its broad plan to harness the growing global influence of Korean culture as an economic growth engine, according to the government Tuesday.

The financial plan was announced as part of the government's three-point strategy to nurture South Korea's content market, which currently represents 2.6 percent of the global content market worth $2.3 trillion.

Which puts South Korea, the home of globally popular K-pop and K-dramas, as the seventh-largest content creating nation.

"At a time when allure and storytelling have competitiveness in all sectors, the growth of the South Korean content industry is leading the advance of related industries and making South Koreans proud of the local content market," Culture Minister Park Yang-woo said.

"All government agencies will join hands to proactively help content creators fulfill their dreams and the Korean content market make a leap."

Under the plan, the government plans to form a special venture fund worth 450 billion won by 2022, dedicated to financing high-risk, small-pocketed content creation projects.

The fund will particularly focus on helping relative minor genres, such as publication and animation, according to First Vice Culture Minister Kim Yong-sam.

The strategy also includes another major financial scheme to come up with corporate guarantee by 2022 worth some 740 billion won so that small content creators can gain more bank loans in a stable manner.

The government said those financial measures, together worth more than 1 trillion won, are expected to drive up the number of medium-sized content firms with sales of over 10 billion won to 2,000 from some 1,700 as of now.

"The content sector is a high-risk and high-return industry, where the government hopes to lure bold, aggressive investment," Vice Minister Kim said in a press conference held hours before the announcement of the plan.

"The government plan will not end in 2022 but continue to be active thereafter," he said.

Another major pillar of the strategy involves connecting the global growth of "hallyu," the phenomenon of Korean pop culture content's popularity overseas, with exports of Korean consumer products.

The government will dedicate the Olympic Gymnastics Arena in eastern Seoul exclusively to K-pop concerts and build a new stadium for e-sports in a bid to lure in more Korean culture lovers from outside of Korea.

It will also help expand the global network of the King Sejong Institute, a government-sponsored Korean language education organization, to some 220 outlets across the globe, according to the details of the strategy.

The strategy also includes the practical use of the emerging technologies -- virtual reality and augmented reality -- in sectors like defense, medical services and education.

The comprehensive program is expected to have the effect of bringing the South Korean content industry's annual sales and exports to over 150 trillion won and $13.4 billion by 2022, according to the government.

It could also drive up the size of employment by the sector to some 700,000 workers and the annual volume of hallyu-driven foreign tourists to some 180,000 by 2022. 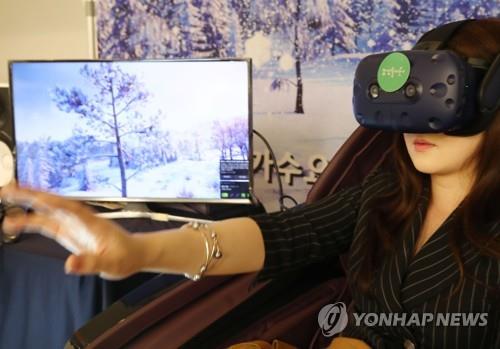