SEOUL, Sept. 18 (Yonhap) -- South Korea's Hyundai Motor Group, a staunch auto manufacturer here, is now undergoing seismic changes on a move to morph into a future mobility solutions provider under its heir apparent's leadership, by focusing on future vehicles, such as autonomous and connected cars.

Executive Vice Chairman Chung Euisun, 50, has led an aggressive drive to transform the South Korean automotive group, which had focused on manufacturing vehicles into a leader in next-generation vehicles and related technologies.

The group named Euisun, the only son of 82-year-old Chairman Chung Mong-koo, in September last year to the second-highest position at Hyundai amid growing protectionism in major export markets, such as the United States and China, and tougher competition with rivals. 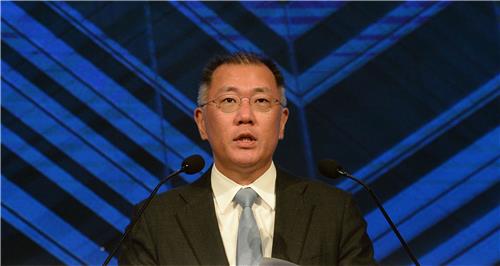 "Chairman Chung focused on improving the quality of vehicles to enhance Hyundai's brand awareness in global markets. But the chief vice chairman also looked to mobility technologies as he sees them as a future growth driver for the company," a company official said over the phone.

Among others, Hyundai Motor as a "first mover in hydrogen cars" has made a hefty investment in the development of hydrogen fuel-cell electric vehicles as it aims to take the lead in the future car industry.

The maker of the Sonata sedan and the Palisade SUV announced in December that it will invest 7.6 trillion won (US$6.7 billion) in hydrogen car-producing facilities and related R&D activities by 2030.

Under the plan, the carmaker will establish two separate plants to churn out 500,000 hydrogen vehicles in 2030. A hydrogen car is considered to be environment-friendly since it emits only water vapor as it generates electricity.

Hyundai Motor had sold about 2,400 Nexo hydrogen cars in global markets as of the end of July.

In April this year, Hyundai Motor set up a joint venture with the Swiss-based hydrogen energy firm H2E to supply 1,600 hydrogen trucks to the country by 2025.

Hyundai Motor's hydrogen initiative is in line with the Seoul government's drive to increase the number of zero-emission passenger and commercial cars on the roads and establish the charging infrastructure in the coming decade.

In other efforts, Hyundai Motor invested 78 billion won in overseas startups that have advanced technologies involving autonomous vehicles and artificial intelligence in the first half of this year.

In its latest investment, Hyundai Motor purchased a 20 percent stake in Ionity, which is a joint venture among carmakers and is emerging as the main electric car fast-charging network in Europe.

Carmakers, such as BMW, Ford, Mercedes-Benz and the Volkswagen Group, set up Ionity in 2017 to build the network to help sell their EVs in European countries.

Last year, Hyundai Motor and its 34 percent-owned Kia Motors Corp. jointly invested $275 million in Southeast Asian ride-hailing firm Grab Inc. as they aim to strengthen their presence in the region by supplying their vehicles in Grab's fleet.

Grab is one of the most frequently used offline mobile platforms in Southeast Asia.

"Hyundai has some of the world's leading technology in electric vehicles, and we're very excited to work with them on what we believe is to be sustainable mobility for consumers in Southeast Asia," Grab President Ming Maa told Yonhap last year. 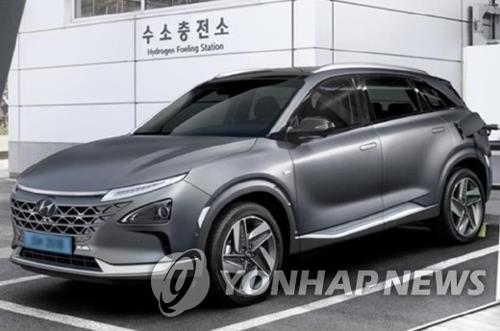 Hyundai Motor and Kia Motors are not alone in the groupwide mobility initiative.

On top of future mobility efforts, Hyundai has continued to place foreign talents in key decision-making positions by recruiting dozens of luxury and performance car designers and engineers.

The recruiting drive began in 2006, when Kia hired ex-BMW designer Peter Schreyer in order to improve the quality of its vehicles in terms of design and performance.

Dozens of foreigners have since joined the Korean auto group. They include former Bentley chief designer Luc Donckerwolke in charge of vehicle designs at Hyundai and Kia, Thomas Schemera, who led the BMW M performance car division, and former BMW performance car developer Albert Biermann, who is responsible for the development of top-of-the-line vehicles at the group.

Among them, Biermann stands out for being the first foreigner to be named the head of the carmakers' crucial R&D unit. In March this year, Hyundai's board also appointed Biermann as a board member.

In the January-June period, Hyundai Motor's net profit jumped 27 percent to 1.95 trillion won from 1.54 trillion won a year earlier helped by the won's weakness against the U.S. dollar and strong sales of SUVs.

Hyundai and Kia, which together form the world's fifth-biggest carmaker by sales, have set a conservative sales target of 7.6 million units this year. They sold 7.39 million units last year, down 2 percent from a year ago.

Still, the group faces some challenges ahead as its vehicle sales in China, the world's biggest automobile market, do not show signs of a rebound amid its trade war with the U.S. And it has yet to come up with a plan to improve its complicated cross-shareholding structure to satisfy foreign shareholders.