Rep. Lee Ju-young, a five-term LKP lawmaker now serving as the deputy speaker of the National Assembly, and Rep. Shim Jae-chul, who formerly served as the Assembly's deputy speaker, had their heads shaved in front of Cheong Wa Dae in Seoul after attending a party meeting held there.

Former LKP lawmaker Cha Myung-jin also shaved his head at the same place, together with Lee and Shim.

After a head shaving ceremony, Lee and Shim, flanked by other LKP lawmakers and officials, shouted calls for the immediate dismissal of Cho as justice minister. They also shouted slogans such as "Fire hypocrite Cho Kuk," "Free Republic of Korea (South Korea) has died" and "Justice has disappeared." 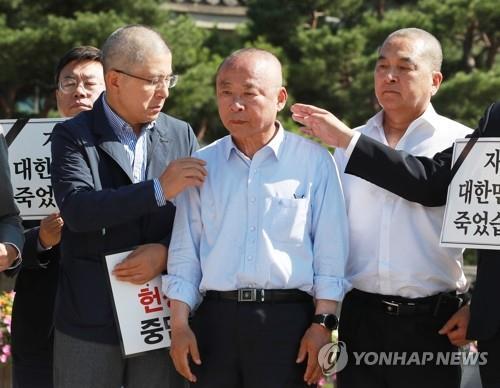 LKP Chairman Hwang Kyo-ahn, who had his head shaved at the same place Monday, gave words of encouragement to the two lawmakers and Cha and brushed their hair off.

At the earlier party meeting, the LKP leaders warned the Moon government over "its refusal to follow common sense" in the recent Cabinet reshuffle.

The LKP's fierce protest came as Moon appointed Cho, former senior presidential secretary for civil affairs, as the new justice minister last week despite the prosecution's probe into corruption allegations involving his family members. The prosecution is looking into a suspicious investment by Cho's family members in a private equity fund, while Cho's wife was indicted for allegations that she played a role in fabricating a school certificate for her daughter. Cho denied his role in the allegations during a parliamentary confirmation hearing held on Sept. 6.

Former Ulsan Mayor Kim Gi-hyun, who belongs to the LKP, said he will also shave his head in Ulsan, 450 km southeast of Seoul, on Thursday in protest.

On Tuesday, former LKP lawmaker and Gyeonggi Province Gov. Kim Moon-soo and LKP lawmaker Khang Hyo-shang shaved their heads in Seoul and Daegu, respectively, while LKP Rep. Park In-sook and a female LKP official had their heads shaved at the National Assembly last Wednesday. On Sept. 10, Rep. Lee Un-ju, an independent lawmaker, became the first member of the National Assembly to carry out head shaving in protest of Cho's ministerial appointment.

Later on Wednesday, the LKP and minor opposition Bareunmirae Party (BP) submitted a proposal to launch a parliamentary probe into the allegations about Cho and his family.

It is not certain whether the motion, signed by 128 lawmakers from both parties, can be approved at a plenary session as such a proposal needs support from a majority of lawmakers in attendance to be passed.

The LKP and BP hold a total of 138 seats in the currently 297-member parliament.