SEOUL, Sept. 18 (Yonhap) -- The signature image of artist Kim Hyun-jung is a young woman dressed up in lavish traditional Korean clothes in contrast with such capitalist symbols as Chanel, Starbucks or McDonald's.

Such unconventional and trendy qualities have made Kim the de facto first star pop artist of traditional Asian painting in Korea, much sought after for collaborative advertisement projects by major commercial brands like Coca-Cola, Nescafe and Woori Bank, as well as JYP Entertainment, the music label of K-pop bands TWICE and GOT7.

Her flourishing career was recognized by Forbes, which listed her in its 2017 Asian list of 30 Under 30 for the art category of influential artists under the age of 30. 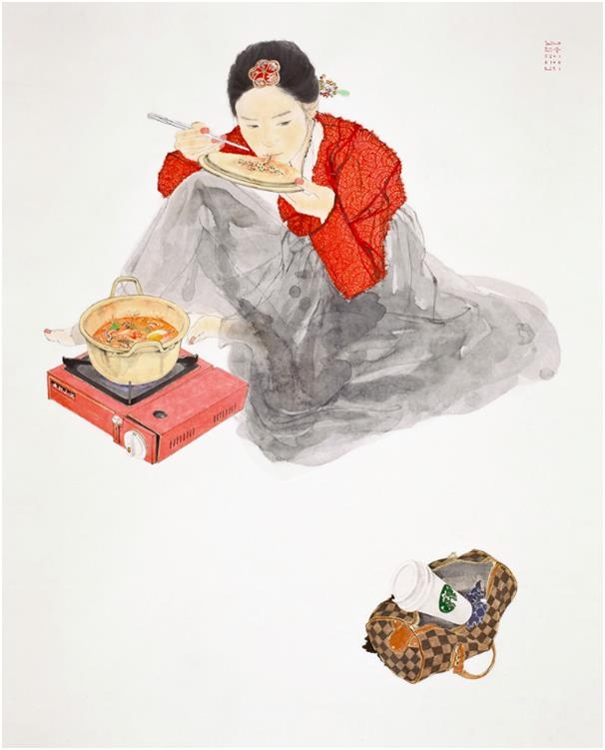 The main motif of her women painted on traditional Korean mulberry paper dates back to her school years at the prestigious Seoul National University.

"Korean culture is on a Confucian base where people put the top priority on keeping to etiquette. It makes people unable to put their innermost mind out for display," Kim said in an interview with Yonhap News Agency on Wednesday.

Under the veneer of etiquette and modesty, however, people like her want and pursue desires, a contradictory duality that she wanted to capture in her work first for her undergraduate homework project back in her early 20s.

"I started out with a wish to put into painting (a woman) who is wearing the most lofty, sophisticated dress, but acting most unsophisticatedly," Kim said.

However hard one tries to cover it up, such duality is in fact so obvious to the eyes of others that it looks rather cute, she said, adding that the half transparent hanbok skirts her women are wearing were intended to point to the naivete.

The explicitness in her paintings and her frequent collaboration with commercial brands at first became a source of finger pointing by her senior or fellow artists of traditional painting, but she is not sorry about the commercialization of her artwork.

In fact, the commercial rendering of her work encouraged Kim to go beyond the limits of the traditional painting style to better adapt her work to the popular formats of computer or smartphone screens. 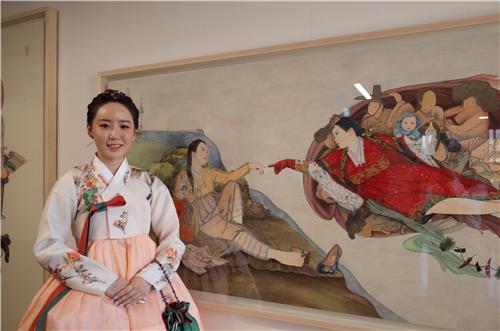 In keeping with the traditional style, her early works were painted in subtle water colors at first.

But her color palette became more vibrant and strong as her career took off in a matter of several years, according to the 30-year-old artist, who attributed the change to her works' frequent presentation online.

"My dream is to pursue the kind of art that breathes with people and society. The art I am dreaming of is not something that is enshrined in an art museum and untouchable, but something that makes you have fun and be entertained."

Such a dream encourages her to reach out to audiences far and wide through her 13 SNS accounts, which together command some 200,000 followers.

Like her female characters explicitly going after their desires, Kim seeks to go beyond the conventional stereotype of a secluded, financially squeezed painter to pursue commercial success as well as critical acclaim.

Having drawn extensively on young, contemporary women, she is now shifting her focus to listless women at ages at which they are deemed eligible for marriage, like herself.

Her satirical perspective is evident in her latest works parodying such timeless masterpieces as Michelangelo's "The Creation of Adam" or Jacques-Louis David's "Napoleon Crossing the Alps."

The first batch of works under her new theme, marriage, just finished a two-week exhibition last week at a local art center in Seoul.