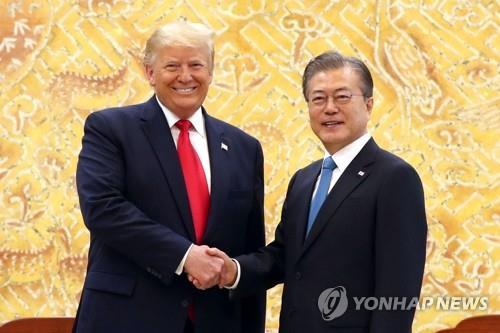 However, South Korea would like to concentrate on the North Korea issue, as the summit comes just ahead of working-level nuclear talks between Pyongyang and Washington, the official said.

He pointed out the significance of an inter-Korean summit agreement reached in Pyongyang a year earlier.

The Sept. 19 deal is a "strut" to support denuclearization talks between the U.S. and North Korea, he said.

As shown in recent summit talks involving the two Koreas and the U.S., an improvement in inter-Korean ties leads to progress in Pyongyang-Washington relations, he added.

"What's important is to connect the current, rather stable situations with permanent peace and denuclearization," the official said.

The Korea peace process, based on Moon's warm approach toward Pyongyang, is going through another "political wave" created after the June 30 gathering of the leaders of the three sides at the DMZ village of Panmunjom, he said.

Meanwhile, Moon is scheduled to arrive in New York on Sunday. The following day, he will meet separately with U.N. Secretary-General Antonio Guterres and attend the U.N. Climate Action Summit and an event to prepare for a P4G summit. P4G stands for Partnering for Green Growth and the Global Goals 2030, a new climate alliance aiming to become a new engine to drive eco-friendly growth.

Moon is joining the annual U.N. session for the third consecutive year. This year's meeting is expected to draw a total of 151 top leaders of 100 member states.

Moon's participation in it will serve as a chance to drum up the international community's support for the Korea peace process and expand Seoul's contribution to dealing with such global issues as climate change and sustainable development, Cheong Wa Dae said.