Lee Do-hoon, special representative for Korean Peninsula peace and security affairs, made the remark to reporters as he arrived in Washington for talks with his U.S. counterpart, Special Representative for North Korea Stephen Biegun.

The two are scheduled to meet Friday to coordinate their positions before Washington and Pyongyang sit down for talks on denuclearizing the regime in exchange for economic and political concessions. 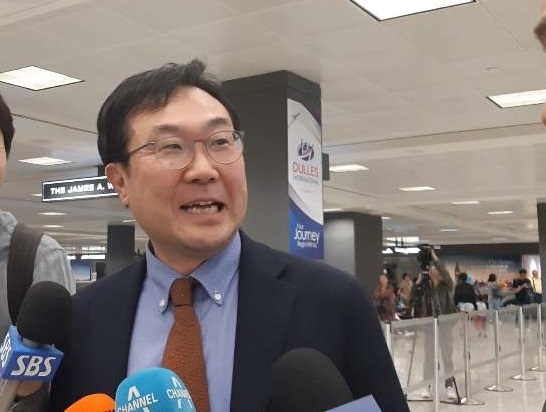 North Korea has proposed that they meet in late September, but demanded that the U.S. come up with a new proposal acceptable to Pyongyang.

"It's possible it will happen soon," Lee told reporters at Washington's Dulles International Airport, adding that the two sides have remained in constant communication. "The New York channel is always open, so I understand that they can communicate whenever they need to."

The New York channel refers to the North Korean mission to the United Nations, which has often been used as a communication channel absent formal diplomatic ties between Washington and Pyongyang.

Lee said that in his talks with Biegun he plans to discuss ways to maintain dialogue momentum with the North while also making progress on substantive issues.

North Korea has renewed demands for sanctions relief and security guarantees, saying the two issues will need to be addressed before any discussion of its denuclearization.

"(North Korea) has recently shifted its emphasis from sanctions relief to so-called security guarantees for its regime, so (South Korea and the U.S.) are discussing and studying various ways (to address that)," Lee said.

On North Korea's demands for a "new calculation method" from the U.S., Lee said Washington will have to find out exactly what that means when working-level talks resume.