SEOUL, Sept. 20 (Yonhap) -- South Korea's agricultural ministry said Friday it is conducting tests on two more suspected cases of African swine fever (ASF) after the country confirmed two cases of the deadly virus early this week, with the results set to be delivered later in the day.

The suspected ASF cases were reported from two pig farms in Paju, located near the heavily fortified border with North Korea, where the first confirmed ASF case was also reported on Tuesday.

The second confirmed ASF case was reported in neighboring Yeoncheon the following day, raising concerns over the spread of the highly contagious animal disease across the country.

A total of three pigs were found dead earlier in the day, with the quarantine authorities testing samples of the dead pigs to determine if they were infected with the highly contagious disease, according to the Ministry of Agriculture, Food and Rural Affairs.

The two farms were raising 3,000 and 4,200 pigs, respectively, and were located within 10 kilometers of the Yeoncheon farm.

Although ASF is not harmful to humans, it is fatal and highly infectious for pigs, with no cure currently available.

The disease is mainly spread by contaminated feed or by direct contact with people and wild animals with the virus.

The ASF cases came roughly four months after North Korea reported its first confirmed case of the disease at a farm near its border with China to the World Organization for Animal Health.

As of Friday, the ministry said it had culled more than 10,000 pigs since the first ASF case was confirmed.

The ministry decided to slaughter pigs within a 3-kilometer radius of the farms infected with the fever, which is larger than the 500-meter stipulated on the manual, due to the seriousness of the case.

As part of quarantine efforts, the ministry designated the six municipalities of Gyeonggi Province, including Paju and Yeoncheon, as tightly controlled zones.

Quarantine authorities have been carrying out investigations into farms located within 10 kilometers of the infected farms in Paju and Yeoncheon. Of the 107 farms under assessment, half of them were tested to be negative, with studies on the remaining farms being under way.

Pig farms in Gyeonggi Province and Incheon, west of Seoul, will be banned from transporting pigs to other areas for three weeks -- longer than one-week restrictions imposed on farms in other areas.

The authorities plan to launch intensive investigations on not only pig farms, but also slaughterhouses and feed factories.

As the incubation period of ASF can last up to 19 days, the ministry said it would spare no efforts to prevent the spread of the disease, and advised local farms to prevent their pigs from coming into contact with wild boars. 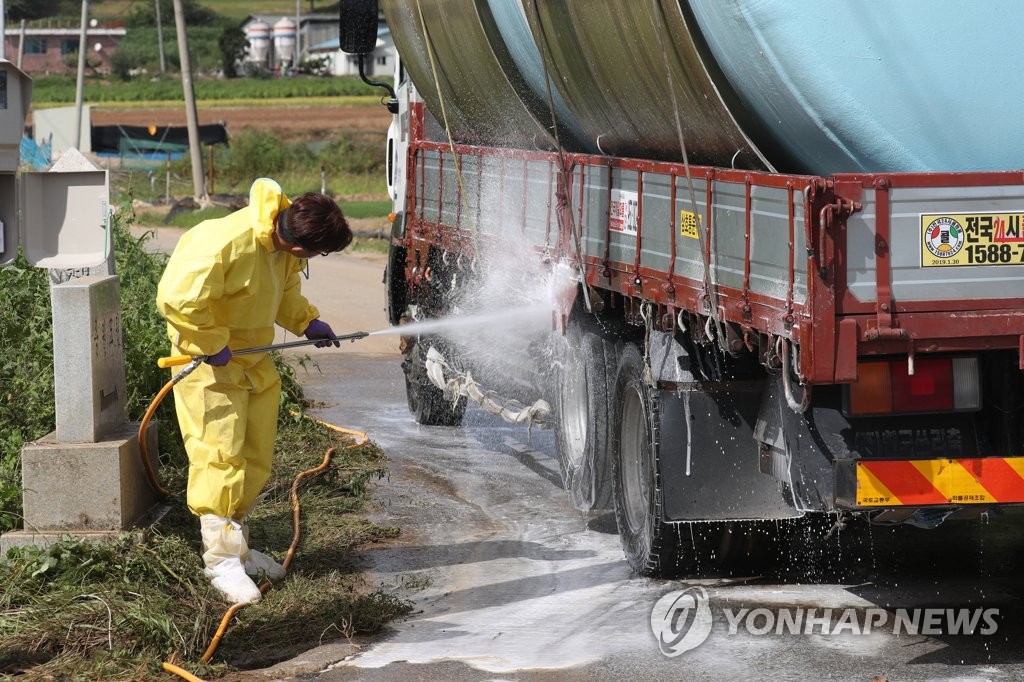