Controversy erupted recently over the ownership of the small uninhabited island near the Northern Limit Line (NLL), the de facto maritime border, after some government data and maps in South Korea erroneously marked it as its territory.

But Seoul's defense ministry has said it is certain that the island is located north of the NLL as jurisdiction was fixed during the armistice agreement signed in 1953, noting that the data and maps were mistaken and will be corrected.

The UNC, which enforces the armistice agreement, "also regards it as North Korean territory, as it has recently delivered such an official stance to our side," the ministry official said.

In the wake of such controversy, the government earlier this week set up a task force involving state officials, experts and local residents for comprehensive research on the matter, and once again confirmed its ownership, according to the ministry.

"The joint team found that the island is located some 700 meters north of the NLL, and around 1 kilometer north of the border line drawn in accordance with the armistice agreement," the ministry said in a release.

Noting that the UNC's Military Armistice Commission also officially confirmed the fact, the ministry said that the task force "will continue to closely look into related issues, such as how the island was registered on local maps and other data as our territory."

Controversy flared up earlier in the day, after Voice of America (VOA) reported on Friday that former UNC commander Gen. Vincent Brooks claimed that the island is located south of the NLL, though it is north of the line drawn by North Korea as its own security line.

But the former commander soon retracted his comment, according to Seoul's defense ministry, saying that he could have made an incorrect comment or the VOA reporter might have misunderstood him. 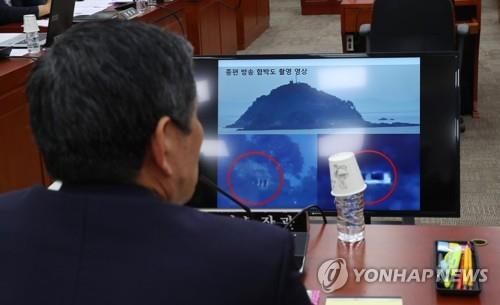