The value of outbound shipments totaled US$15.23 billion last month, plunging 24.5 percent from a year ago, according to the data compiled by the Ministry of Science and ICT.

South Korea's ICT exports had been on the decline since November last year, with overseas shipments down a sharp 21.8 percent in July.

Exports of semiconductors, one of the country's key export items, tumbled 30.5 percent on-year to around $8.1 billion due largely to falling prices for memory chips and slowing demand for system chips.

Shipments of displays dived 26.7 percent to just under $2.2 billion due to dropping prices of liquid crystal displays and weaker demand for mid- and high-priced organic light-emitting diode screens.

By region, shipments to China, including Hong Kong, contracted 32.6 percent to below $7.35 billion, with those to the United States backtracking 14.6 percent to $1.5 billion. Exports to the European Union were down 15.3 percent to $880 million.

In contrast, shipments to Vietnam edged up 1.1 percent to $2.82 billion, marking the fifth consecutive monthly rise, with numbers for Japan gaining 1.8 percent to $320 million.

South Korea imported $8.82 billion worth of ICT products in August, resulting in a trade surplus of $6.41 billion in the sector, the latest data showed.

In the first eight months of this year, the country's ICT exports reached $116.98 billion, down 19.7 percent compared to the same period in 2018. Its imports rose 3 percent to $72.16 billion with the trade surplus hitting $44.82 billion, which is significantly smaller than $75.64 billion tallied at the end of August last year. 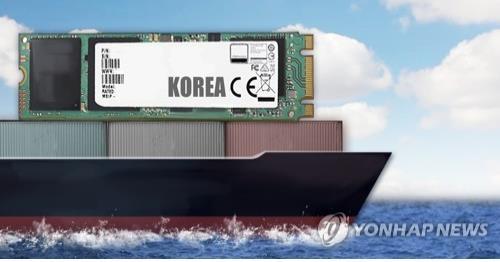 ICT exports down for 10th month in August

ICT exports down for 10th month in August