SEOUL, Sept. 20 (Yonhap) -- A special exhibition will reproduce the banquets the Korean Empire treated to dignitaries from home and abroad during the empire's short-lived reign at the turn of the century.

The exhibition, "Imperial Banquet of the Daehan Empire," is set to open Saturday at the Daehan Empire History Museum at Deoksu Palace's Seokjojeon Hall, a signature three-story stone building where Gojong, the first Korean emperor, used to throw banquets for dignitaries.

Gojong, the last king of the Joseon Dynasty (1392-1910), declared the establishment of the Korean Empire in 1897 in the face of Japan's growing aggression.

Despite such diplomatic efforts, the Korean Empire was brought to its end under the second Emperor Sunjong as the nation was annexed by Japan in 1910.

The exhibition is designed to shed a spotlight on the banquets the empire held through its 14-year reign, starting with Joseon's opening up of its doors to foreign countries in its final years and the drastic changes the following Korean Empire adopted, especially at banquet tables.

The exhibition will include, most notably, the reenactment of the banquet course the junior Roosevelt was served at another one of the palace's buildings, Jungmyeongjeon Hall, in 1905. 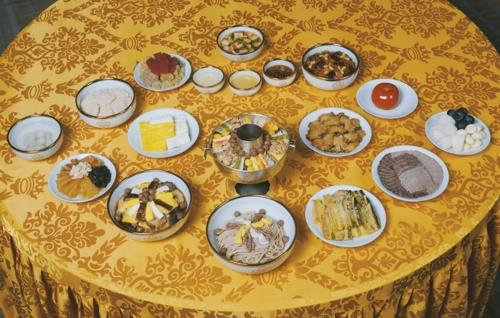 Some have argued that Gojong served a Western course at that time, but the palace management department of the Cultural Heritage Administration reversed the claim in a press briefing on Friday, citing Roosevelt's own observations and other historic records.

Roosevelt testified that she was served "Korean food" in her memoir "Crowded Hours," according to the heritage agency.

It was a lavish course that came with many different sorts of fish and beef dishes, including a steamed gray mullet boiled with beef, and finished up with an assortment of Korean deserts, according to the agency.

"There's a record behind a menu card (from that era) that it was the emperor's first official meal with a woman," an official at the agency also said.

The Korean course presented also embodied Gojong's philosophy to stick to traditional foundations while adopting new changes from outside of the country, according to the official.

The exhibition will also put on show the royal porcelain sets engraved with a plum tree blossom, the royal coat of arms during the Korean Empire as well as banquet invitation cards and photos Roosevelt received from the empire.

Special video clips will also walk visitors through the cooking process at the royal kitchen at that time. 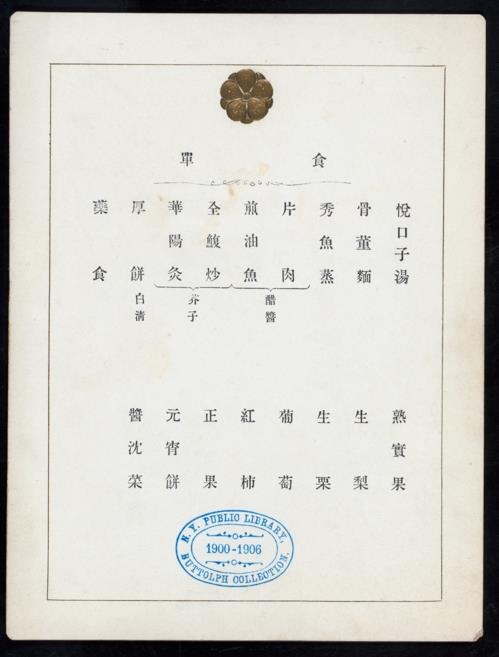