SEOUL, Sept. 20 (Yonhap) -- Korean-American player Kristie Ahn was eliminated in the quarterfinals of the WTA Tour's Korea Open on Friday.

Ahn, world No. 93 and a wild card entry into the tournament, was chasing her maiden WTA title. She was hoping to build on the momentum from the U.S. Open, where she reached the fourth round while taking down former Grand Slam champions Svetlana Kuznetsova and Jelena Ostapenko.

But Alexandrova's 22 aces proved too much for Ahn, who had only two aces. 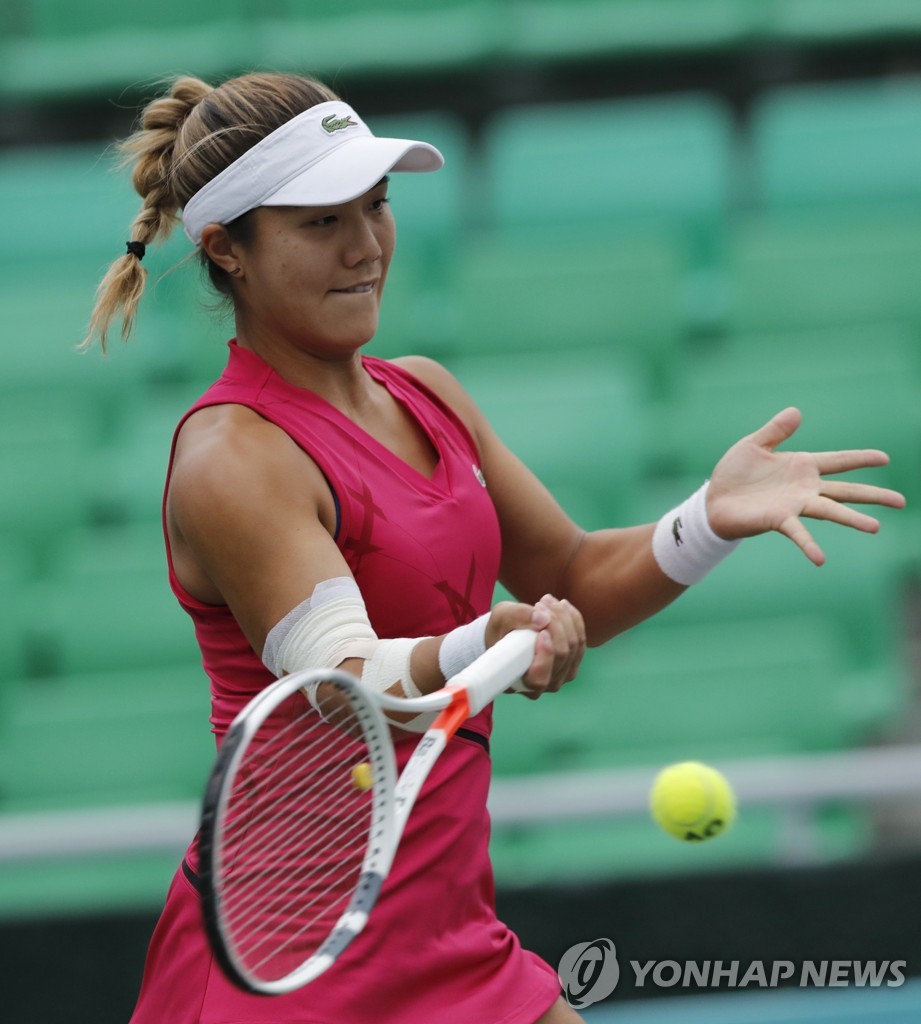 Ahn broke Alexandrova to open the first set and quickly opened a 3-1 lead.

Alexandrova won her service game, thanks to two aces, to cut it to 3-2, and then broke Ahn for the first time to pull even at 3-3 thanks to an array of forehand winners.

The two stayed locked in a groundstroke battle from the baseline as they traded service games.

Then down 5-6, Ahn survived a set point to win the 12th game and force a tiebreak.

And Ahn won seven straight points in the tiebreak to take the opening set. Alexandrova, visibly frustrated with crowd noise, barely put up any fight.

Ahn called a medical timeout after the ninth game of the first set to get her right forearm and elbow retaped. She looked to be experiencing some discomfort in the area.

Ahn double-faulted to go down 30-40 in the fifth game of the second set but saved a break point to go up 3-2.

Alexandrova held her serve in the next game, on the strength of three consecutive aces, and finally broke Ahn in the next game to lead 4-3. The Russian promptly went up 5-3 with a breezy win in her service game.

Ahn held her serve to stay close at 5-4, but Alexandrova again dominated in her service game to win the second set at 6-4. 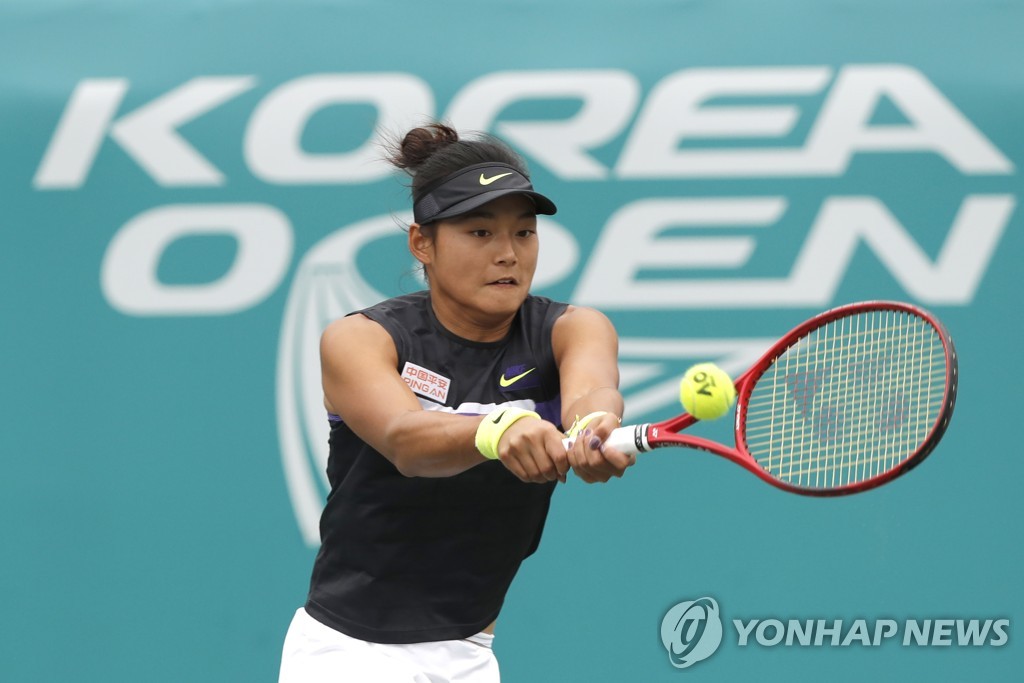 It was Alexandrova's turn to call a medical timeout after the second set, as she received treatment for apparent lower back issues.

Ahn won the first two games of the third set. Serving first, Ahn came back from a 0-30 deficit to claim the first game. Then Ahn rebounded after squandering three break points to win the second game for a 2-0 lead.

Alexandrova returned the favor by breaking Ahn in the next game to cut the deficit to 2-1 and tied the game score at 2-2 by winning her own service game.

Alexandrova broke Ahn in a lengthy fifth game to build a 3-2 lead and never trailed again.

In Saturday's semifinals, Alexandrova will face the No. 4 seed from Poland, Magda Linette. Linette defeated Kirsten Flipkens of Belgium 6-2, 6-3 on Friday.

In other matches earlier Friday, third-seed Karolina Muchova knocked out Priscilla Hon of Australia 6-3, 6-3. The Czech player avenged her loss to Hon in the first round at the 2017 Korea Open.

Wang, world No. 58, made quick work of the 88th-ranked opponent in the opening set. Then in the second set, Wang broke Badosa twice in the final three games to close out the match.

The first break came when the game score was tied at 3-3, as Wang rallied to win the seventh game after a deuce. She won her service game with ease and then broke Badosa again as the unseeded Spaniard self-destructed with a double fault and unforced errors.

With the defending champion, Kiki Bertens, not playing this week and the 2017 champion Jelena Ostapenko having been eliminated in the first round, the Korea Open will have its 16th different champion in its 16th year. 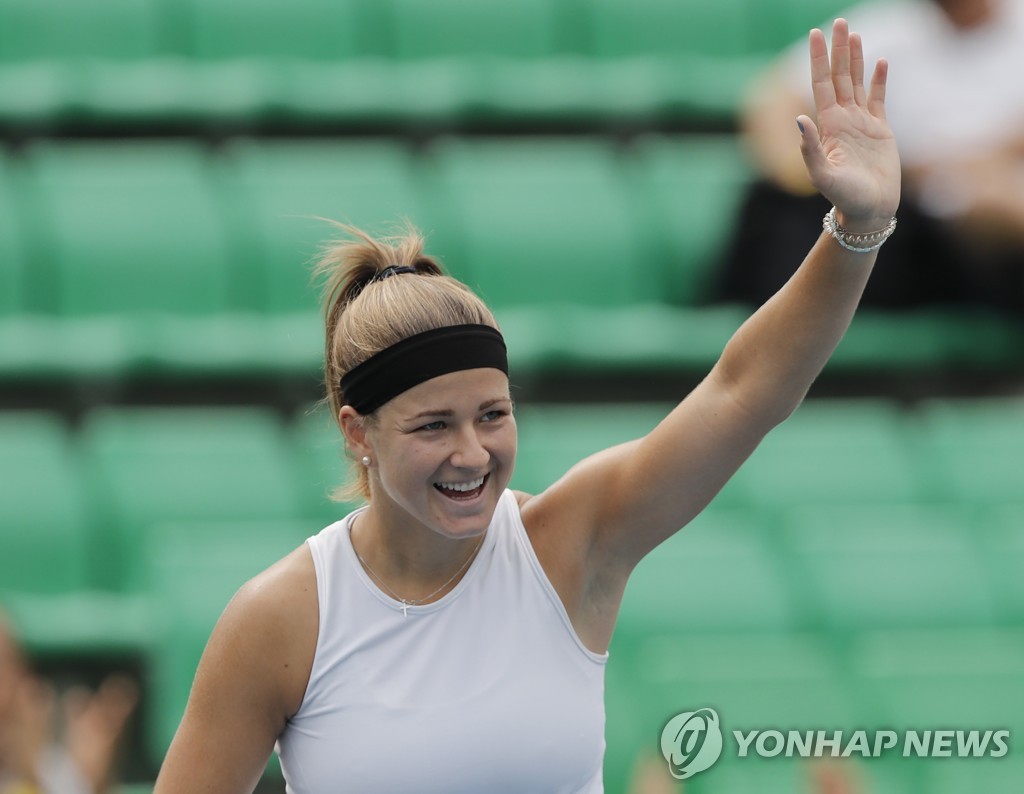