SEOUL, Sept. 23 (Yonhap) -- The Busan OneAsia Festival (BOF), a major annual K-pop concert in the second-biggest South Korean city of Busan, will kick off next month with a star-studded lineup.

The BOF 2019 will run from Oct. 19-25 at the outdoor stage of Busan's Hwamyung Park, Haeundae Beach and Busan Cinema Center at the city center, as well as other public areas in the port city, according to the organizer.

Idol star Lee Jin-hyuk and Sujeong, a member of Lovelyz, will jointly emcee the Family Park Concert, according to the organizer.

Ticket sales for the festival began last week and the organizer, the city of Busan, will unveil the final, third lineup of the music festival early next month. 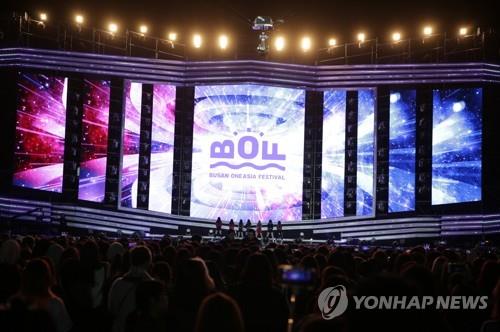 Busan's annual K-pop concert to kick off next month

Busan's annual K-pop concert to kick off next month