SEOUL, Sept. 23 (Yonhap) -- The mayor of Uijeongbu, northeast of Seoul, on Monday called for the early return of U.S. base land in the city, which has been delayed by differences between the South Korean government and the U.S. Forces Korea (USFK) over the cost of decontamination.

The delay "is hampering local development and deepening the phenomenon of urban hollowing out and regional economic slump," Mayor Ahn Byung-young said in a statement.

The city plans to develop the Camp Red Cloud site as a security theme park and Camp Jackson as a culture arts park. The site of another former base, Camp Stanley, will be turned into a complex for the elderly.

The presidential office said late last month that it would push for the early return of scores of U.S. base sites. The remark came ahead of the start this week of the two allies' negotiations on sharing the cost for the upkeep of 28,500 American troops.

Mayor Ahn said the city government and citizens will push for a joint signature campaign for an early base return.

He also said the central government should shoulder the cost of the development of the former bases, citing the city government's poor financial conditions. 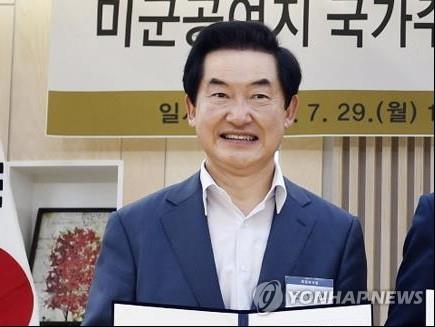